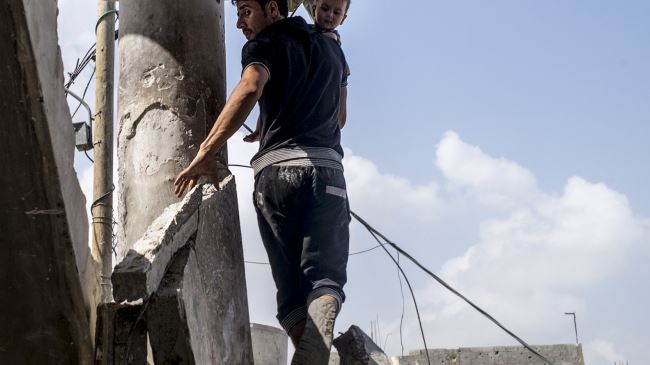 A Palestinian looks at what remains of his house in part of the northern Beit Hanun district of the Gaza Strip on August 5, 2014

The Palestinian resistance movement, Hamas, says Israeli aerial and ground offensive has failed to achieve any of its objectives in the besieged Gaza Strip.

Senior Hamas officials told Press TV correspondent on Tuesday that Israel had only managed to kill Palestinian civilians and demolish buildings in the impoverished region.

Israeli forces retreated from Gaza, claiming that they have achieved their objectives including destruction of cross-border tunnels in Gaza.

The Israeli regime said its troops will be deployed in positions outside Gaza during a three-day ceasefire agreed upon with Hamas.

However, both sides continued to flex their muscles just minutes before the start of the ceasefire.

The last-minute provocation was initiated by the Israeli military which conducted aerial strikes on several targets in northern Gaza. This drew an immediate response from the Palestinian resistance which sent a barrage of rockets to several Israeli cities.

The Israeli military aggression has taken the lives of more than 1,880 Palestinians, mostly civilians, and wounded over 9,600 others in Gaza since July 8.

The UN Human Rights Council recently passed a resolution, calling for an independent probe into Israel’s war crimes in Gaza.