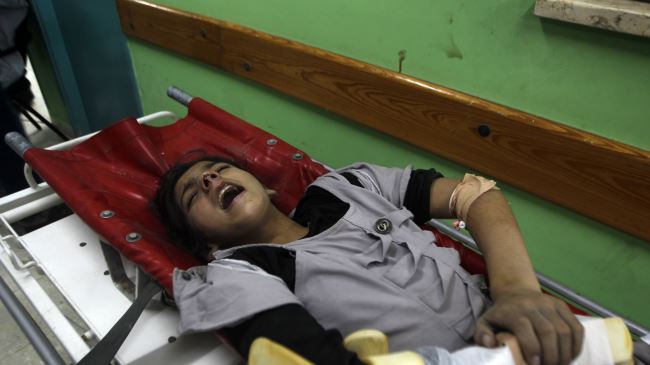 Iran judiciary to give Islamic prize to Gaza medical official

A Palestinian girl wounded in an Israeli military strike is seen on a stretcher as she is treated at a hospital in southern Gaza on August 4, 2014.

The Iranian Judiciary’s Human Rights Committee says it will award a hospital administrator in the Gaza Strip with the first Islamic Human Rights Prize.

The Human Rights Committee said in a statement that it will grant the prize to the administrator of the al-Nasser Pediatric Hospital during a Tuesday ceremony to mark the Islamic Human Rights and Human Dignity Day designated by the Organization of Islamic Cooperation (OIC).

The Human Rights Committee also slammed the West for providing the Israeli regime with military support, saying such measures shed light on the need for a serious review of international human rights documents and organizations.

The statement said the current human rights regulations have been compiled merely based on secular-liberal values favored by the West, while these rules ignore other civilizations and the Islamic wisdom in particular.

According to the Hague Conventions of 1899 and 1907 on the laws of war and war crimes, Gazans are living under occupation and have the right to defend themselves in the face of Israeli aggression, the statement added.

The Iranian human rights organization expressed surprise over claims that the Israeli regime has the right to defend itself, while using banned weapons in its aerial, ground and sea assaults on Gaza.

The Israeli military aggression has taken the lives of more than 1,860 Palestinians, mostly civilians, and wounded over 9,500 others in Gaza since July 8.