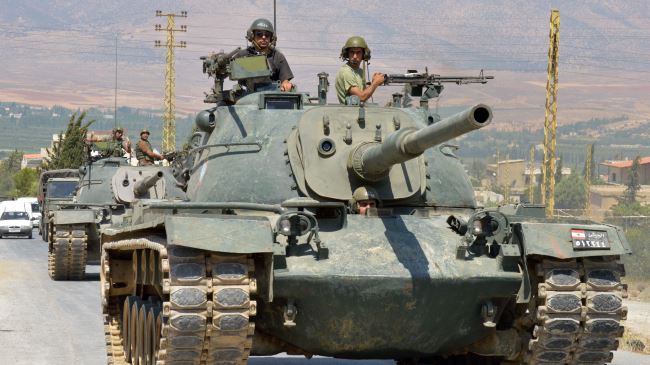 Lebanese soldiers enter the town of Arsal, near the Syrian border, as they head to fight Takfiri militants on August 5, 2014.

She expressed hope that Lebanon would succeed in seeing out the ongoing critical period by strengthening national unity and solidarity among all political currents.

Afkham emphasized that Takfiri groups pose a danger to regional peace and stability and called on the international community to fight the ominous phenomenon of terrorism and its sponsors.

The Iranian spokeswoman expressed sympathy with the Lebanese government, resilient nation and bereaved families of the victims of recent terrorist activities in the country.

A Lebanese military source, speaking on the condition of anonymity, said on Monday that fighting in the mountains around Arsal had killed at least 16 soldiers and dozens of militants.

The army, meanwhile, announced that 22 soldiers were missing, possibly taken hostage, and 86 others were wounded.

The Takfiri militants are said to have infiltrated into Lebanon from Syria’s mountainous al-Qalamoun region.