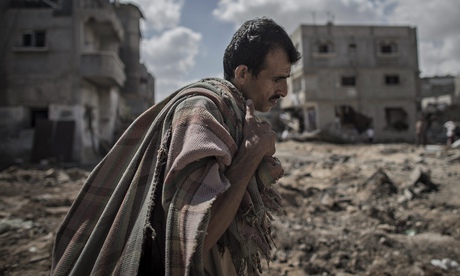 A Palestinian man carries belongings salvaged from his ruined home in the village of Khuza’a, once home to 10,000 people. Photograph: Oliver Weiken/EPA

Hostilities suspended as of Tuesday morning, with Israel saying it has finished destroying tunnels and withdrawn forces

A definitive end to the four-week conflict in Gaza appeared possible on Tuesday morning as an agreed 72-hour ceasefire between Hamas andIsrael came into effect and the Israeli military said it had withdrawn from the Palestinian territory.

The suspension of hostilities came into force at 8am on Tuesday and is due to be followed up with further discussions in Egypt about ending the four-week war. The Israeli military said it had withdrawn all forces from Gaza by 8am. A volley of last-minute rockets was fired by militants towards Israel.

The likelihood of Israel agreeing to a longer-term ceasefire appeared to increase on Tuesday as Israeli radio stations reported that ground forces had completed their main Gaza war mission of destroying cross-border tunnels. At least 32 of the underground passages and dozens of access shafts had been located and blown up, Israel Radio and Army Radio said.