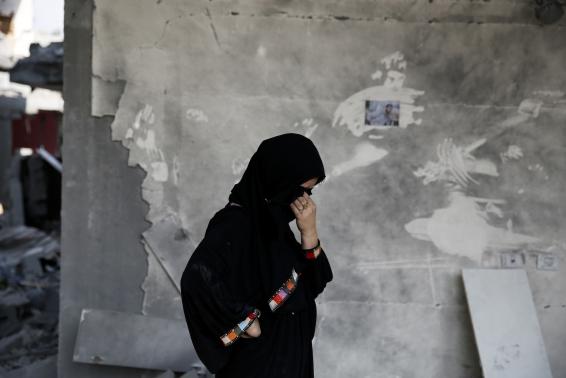 A Palestinian woman wipes her face in her damaged home after returning to Beit Hanoun town, which witnesses said was heavily hit by Israeli shelling and air strikes during the Israeli offensive, in the northern Gaza Strip August 5, 2014.
CREDIT: REUTERS/FINBARR O’REILLY

(Reuters) – The stench of rotting animal carcasses was in the air as 10-year-old Ahmed al-Kafarna picked through the debris of his Gaza home after a ceasefire began on Tuesday, looking for histoys.

“Mine was the middle room, I found it, I mean the rubble,” he said. “Those are the photos of me, with my dad and my mother and sisters. But I couldn’t get my toys – they were crushed.”

Beit Hanoun, a northern Gaza town near the Israeli border, was devastated by more than four weeks of fighting between Israeli forces and Palestinian militants.

With shocked looks, residents who had fled their houses, as instructed by the Israeli army forces, and returned after the 72-hour, Egyptian-brokered truce went into effect, took in the sight of entire clusters of houses destroyed by shells and bombs.

To many, it seemed as if an earthquake had hit the farming community of 30,000, where dead donkeys, horses and birds littered the ground – along with unexploded Israeli ordnance.

“Beit Hanoun used to be called a fruit basket – a land of lemons and oranges,” said Abdel-Sattar Ismail, standing next to the wreckage of his home. “Israel has turned it into scorched earth, like Sarajevo.”

“Our fighters fought Israeli soldiers face-to-face and killed them. The Israelis responded by bombing sleeping civilians in their houses. Where is the honor of Israel,” he asked.

Gaza officials say the war has killed 1,867 Palestinians, most of them civilians. Israel says 64 of its soldiers and three civilians have been killed since fighting began on July 8, after a surge in Palestinian rocket launches.

The truce gave rescue workers in Beit Hanoun an opportunity to search for bodies buried under the debris. To the east, a column of Israeli tanks raised a dust cloud, part of a pullout that ended a ground operation that started on July 17.

Ahmed’s father, Ayman al-Kafarna, collected a carpet, some clothes and damaged kettles and threw them to the side of the road. He said he planned to pitch a tent and stay outside what was left of their home until alternative housing was offered.

“We are currently in a U.N. school but soon we will have to evacuate as the new school year starts later this month. Where should I go with my family,” Kafarna asked.

Some 260,000 of the Gaza Strip’s population of 1.8 million are sheltering in U.N. facilities. Human rights groups put the total number of displaced persons at 520,000.

“The world has an obligation now to find us new houses, the world must take Israel’s leaders to courts for their acts of genocide,” said Kafarna, a father of eight.