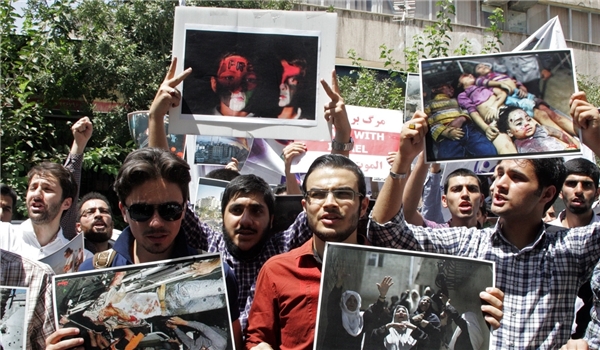 TEHRAN (FNA)- Hundreds of students staged a rally in front of Egypt, Turkey and Pakistan’s embassies in Tehran on Monday afternoon to protest at the Israeli crimes against the Palestinians, and urge Islamic countries to support the innocent people in the Gaza Strip .

The protestors called on the Egyptian government to open the Rafah border crossing to the humanitarian aids destined for the Gaza Strip.

The organizers of the rallies announced that the Iranian students have written letters to a number of Muslim states’ embassies in Tehran to protest at their silence on the Israeli massacre of the Gazans and their lack of cooperation in sending humanitarian aid to the Palestinians who are in urgent need of food stuff and medicine.

Numerous rallies have been held in Iran since Israel launch its airstrikes on the defenseless Palestinian population in the besieged enclave on July 8.

On Saturday, Tehran University Professors, staff and students in a statement blasted the UN secretary-general for his inaction vis-a-vis Israel’s ongoing atrocities and massacre of the Palestinians in Gaza, and urged Ban Ki-moon to comply with his duty as the head of the world body to stop Tel Aviv’s ongoing bloodshed in the besieged enclave.

Also, Hundreds of children staged a rally in front of the office of the United Nations Educational, Scientific and Cultural Organization in Tehran earlier today to shout protest against the Israeli crimes against the Palestinians in Gaza and urge UNESCO to stop continued massacre of the Palestinian children.

The Iranian children called on the UN to deal with the aggravating conditions of the Palestinian infants and children.

The Palestinian death toll in Israel’s onslaught on Gaza has now reached nearly 1,822, with over 10,000 people injured. Most of the casualties have been civilians, including a large number of women and children.