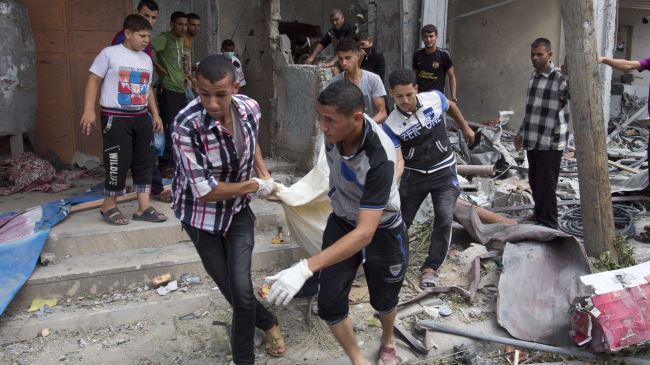 Palestinian men remove the body of a child found east of the Rafah refugee camp in southern Gaza Strip, August 4, 2014.

A child has been killed and 30 people injured in an Israeli airstrike on a refugee camp in the blockaded Gaza Strip within minutes after Tel Aviv’s unilateral ceasefire.

According to witnesses, the attack was carried out on Monday in Gaza City shortly after the truce when a missile fired from an F16 warplane crashed into a three-story house wedged between two tall buildings inside the Shati refugee camp.

Ayman Mahmud, who lives in the neighborhood, said “just after 10 a.m.” a new strike happened, adding, “There is no truce. How could there be a truce, they are liars, they don’t even respect their own commitments.”

Earlier on Monday, the Israeli army declared a unilateral seven-hour halt to attacks on Gaza, beginning at 0700 GMT. However, the Palestinian resistance movement Hamas dismissed the temporary truce and warned people to exercise extreme caution when venturing out onto the streets after earlier temporary ceasefire arrangements collapsed.

Hamas spokesman, Sami Abu Zuhri, said in a statement that the ceasefire announced by Israel “is an attempt to divert the attention from Israeli massacres.”

This is not the first time Israel has declared a ceasefire. On Friday, a planned 72-hour truce was broken by Israel within hours of taking effect.

More than 1,820 Palestinians have so far been killed and over 9,400 others injured since the Israeli military first launched its offensive against the Gaza Strip on July 8.