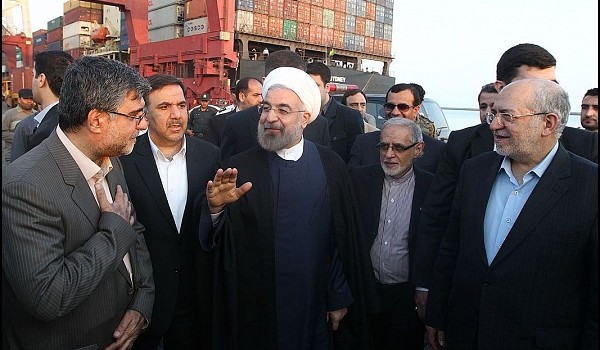 Iran’s economy after one year of Rouhani

Iranian President Hassan Rouhani was elected to office largely on his promise to lift the economy out if its deepest recession since the Iran-Iraq war. One year later, evidence of a recovery is hard to find, but he has achieved a few significant accomplishments.

Rouhani’s most visible accomplishment is lower inflation, down by more than half from over 40 percent a year ago. The runaway inflation of the last three years that alienated the middle class and even many conservatives from former President Mahmoud Ahmadinejad is now back to a level that Iranians consider normal.

Containing inflation was achieved at considerable cost, though, by keeping government expenditures to a minimum and forgoing any kind of fiscal or monetary stimulus. Rouhani even managed to increase energy prices last April without any protest, indicating that his popularity has so far survived austerity. The energy price hikes were substantial enough to close the budget gap left by Ahmadinejad’s generous — some would say irresponsible — cash transfers. The price of gasoline was increased by 75 percent, diesel by 67 percent, and other energy prices by about 30 percent.

Rouhani’s second economic achievement was restoring the business confidence lost to the erratic economic management of the Ahmadinejad years. He did this by simply getting elected and by appointing a competent team. His election stopped or at least slowed down the hemorrhaging of Iran’s economy, which has been hit by draconian international sanctions and bad domestic policies.

Rouhani’s greatest economic success came in the form of a political victory. He overcame substantial domestic opposition to rapprochement with the West to sign the Joint Plan of Action (JPA) with world powers last November. The economic impact of the JPA has been underwhelming, but without it the economy would have continued to slide.

The agreement can be credited with the strengthening of Iran’s currency, the rial, which is a good indication of rising business confidence. Since November, Iran’s oil exports have also increased by 30 percent, about $7 billion of Iran’s frozen funds have been released, and petrochemical exports, which received specific sanctions relief, have increased.

This spring, auto production (also marked for sanctions relief in the JPA) was up by a whopping 90 percent compared to a year ago according to Mohammad Reza Nematzadeh, the minister for industry, mines and commerce. He also mentioned increases in petrochemicals production by 9 percent and durable goods by 30 percent.

These improvements are most likely lost on the average Iranian, whose job prospects and income has not increased since Rouhani took office. The obvious culprit is, of course, the financial and shipping sanctions that limit Iran’s access to its foreign exchange earnings and continue to choke large sections of its industries. Manufacturers are still using cumbersome and costly channels to procure their raw materials and parts. For them, the optimistic official statements and newspaper headlines proclaiming the imminent “collapse of the sanctions regime,” is just talk. Indeed, while Western critics of Iran’s limited sanctions relief, particularly in Washington, point to the flood of foreign business missions to Tehran, no actual investment has occurred due to the continued uncertainty about the future of the sanctions.

The latest disappointing jobs report shows the limited impact of the JPA so far. Industry as a whole continued to lose jobs last spring, more than 6 months after the signing of the agreement.

There were 700,000 fewer industry workers employed in spring 2014 than when Rouhani took office. These numbers cast doubt on the claim made in a recent report published by the Foundation for Defense of Democracies and Roubini Global Economics that the economic benefit of the JPA “is reflected in increased economic output and improvements in employment within Iran.” National accounts data published last week shows that industrial output for 2013/14 as a whole was down by 4.5 percent and industrial employment has been falling through spring 2014.

Data on personal incomes and consumption published by the Statistical Center of Iran also indicates that economic recovery is yet to come. For the Iranian year that ended on March 20, 2014, real household consumption fell by 5 percent for urban households and 12 percent for rural ones. Their real food expenditures meanwhile fell by 14 percent.

So does the anemic economic recovery weaken Rouhani’s hand in the nuclear negotiations and should the West therefore toughen its position now in order to extract further concessions from Iran?

Sanctions have no doubt increased Iran’s willingness to negotiate, but it would be a mistake to think that more sanctions always brings more concessions. Most Iranians believe their government has held its part of the bargain since last November, so they would see more sanctions now as bad faith on the part of the P5+1 (US, UK, France, Russia, China plus Germany) and blame the failure of the negotiations on them. This would reduce pressure on Rouhani to make further concessions.

Furthermore, the Iranian middle class, after having survived eight years of Ahmadinejad, still regards Rouhani as the best leader to champion its interests. The poor, who, despite years of sanctions are decreasing as a proportion of the total population, are meanwhile relatively well protected. Thanks to the cash assistance program instituted by Ahmadinejad (about $40 per person per month in international dollars) in 2012/13, when average real incomes and expenditures were falling, poverty rates actually fell. At the time, only 5 percent of the population was counted as poor, based on a $5 per day poverty line (in international dollars). Iran’s effective income assistance programs can be adjusted to protect them against further economic deterioration.

The more interesting question is how the course of the talks could affect Rouhani’s presidency beyond its first year.

As they stand now, Rouhani’s plans are helping the private sector lead the economic recovery and letting markets form the basis of economic life in the Islamic Republic. If the talks succeed in the next four months and sanctions are gradually lifted, Iranian businesses are sure to spring into action, as they do when oil money starts to flow. Rouhani will be then be well on his way to a second term.

But Rouhani has reservations about this scenario. In the past, oil-induced booms have deepened Iran’s dependence on the outside world, something that runs counter to the vision of a “Resistance Economy” identified with the Supreme Leader.

If the talks fail, as the Washington hawks seem to wish, Rouhani would have to reverse course; instead of re-integrating Iran into the global economy with the private sector in the lead, he would promote economic self-reliance and resistance to outside pressures, a strategy that fits much better with the state and its para-statals at the helm.

In the narrow, security-focused discussion of Iran that passes for analysis these days in the US, the broader issues of importance to Western leaders are easily lost. But for those interested in longer-term relations with Iran, it helps to bear in mind that the current negotiations are not just about Iran’s nuclear activities; they are also about the direction that Iran’s economy will take in the coming decade, and who could benefit from it.