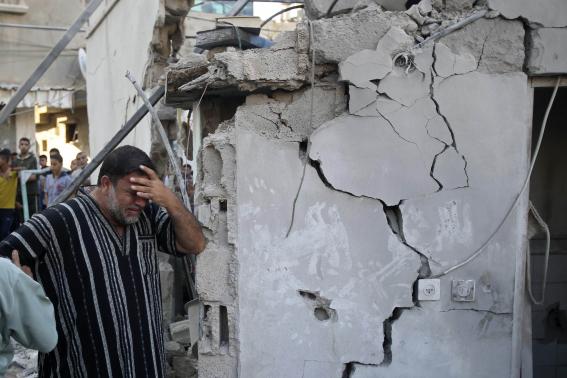 Ten dead in strike on school in new Gaza fighting

A Palestinian man reacts as he stands next to the wreckage of a house, which witnesses said was destroyed in an Israeli air strike that killed at least nine members from the al-Ghol family, in Rafah in the southern Gaza Strip August 3, 2014.
CREDIT: REUTERS/IBRAHEEM ABU MUSTAFA

(Reuters) – An Israeli air strike killed 10 people and wounded about 30 on Sunday in a U.N.-run school in the southern Gaza Strip, a Palestinian official said, as dozens died in Israeli shelling of the enclave and Hamas fired rockets at Israel.

U.N. Secretary-General Ban Ki-moon described the attack as a “moral outrage and a criminal act” and called for those responsible for the “gross violation of international humanitarian law” to be held accountable.

The Israeli military said it was looking into the attack, the second to hit a school in less than a week.

And amid Hamas accusations that Israel had misled the world about the alleged capture of an Israeli soldier, the officer, Lieutenant Hadar Goldin, was buried on Sunday after the military said it recovered remains and that he was killed in action.

Goldin’s suspected abduction led to the collapse of a U.S.- and U.N.-brokered ceasefire on Friday.

In Cairo, efforts to find a new truce were due to resume on Sunday.

Israeli media, on the 27th day of the fighting, reported that most Israeli troops had pulled out of Gaza, and Reuters TV footage showed a column of Israeli tanks and dozens of infantrymen leaving the enclave.

An Israeli military spokesman stopped short of calling the move a withdrawal, but said residents from some evacuated Gaza neighbourhoods had been told by the army they could return.

In the town of Rafah, where the military has been battling militants, a missile from an Israeli aircraft struck the entrance to the school, where Palestinians who had fled their homes were sheltering, witnesses and medics said.

“It is simply intolerable that another school has come under fire while designated to provide shelter for civilians fleeing the hostilities,” he said.

Last Wednesday, at least 15 Palestinians who sought refuge in a U.N.-run school in Jabalya refugee camp were killed during fighting, and the U.N. said Israeli artillery had apparently hit the building. The Israeli military said gunmen had fired mortar bombs from near the school and it shot back in response.

Earlier on Sunday, Israeli shelling killed at least 30 people in Gaza, a day after Prime Minister Benjamin Netanyahu vowed to keep up pressure on Hamas even after the army completes its core mission of destroying a tunnel network used by Palestinian militants to attack Israel.

In Rafah, Fatah faction leader and local resident Ashraf Goma said locals were unable to deal with the casualties.

“Bodies of the wounded are bleeding in the streets and other corpses are laid on the road with no one able to recover them.

“I saw a man on a donkey cart bringing seven bodies into the hospital. Bodies are being kept in ice-cream refrigerators, in flower and vegetable coolers,” Goma told Reuters.

The Israeli army said that more than 55 rockets had been fired from Gaza at Israel on Sunday.

Israeli troops had discovered a cache of 150 mortar bombs in the southern Gaza Strip. They had clashed with Palestinian fighters who emerged from a tunnel and with others preparing to launch an anti-tank missile from a house in the area, a military statement said.

Israel began its offensive against Gaza on July 8 following a surge of cross-border rocket salvoes by Hamas and other guerrillas. The fighting on Sunday pushed the Gaza death toll given by Palestinian officials to 1,775, most of them civilians. Israel has confirmed that 64 soldiers have died in combat, while Palestinian rockets have also killed three civilians in Israel.

In new truce moves, a delegation from Hamas and the Islamic Jihad group arrived in the Egyptian capital, but a quick breakthrough seemed unlikely in the absence of Israeli representatives.

After accusing Hamas of breaching Friday’s short-lived ceasefire, Israel said it would not send envoys as scheduled.

Israel says it wants Gaza demilitarized under any long-term arrangement.

Hamas, sworn to Israel’s destruction, demands Israel withdraw its troops and a lifting of Israeli and Egyptian blockades that have choked Gaza’s economy.

A Palestinian official said Palestinian representatives in Cairo had formulated a joint paper listing those conditions as well as demands for the release of Hamas prisoners held by Israel and the start of a Gaza reconstruction process.

In Gaza, Israel intensified attacks in the area of Rafah along the border with Egypt, where Goldin had been feared captured on Friday. Hamas described Israeli shelling in the town as unjustified retribution for what the group said was a false accusation that the officer had been abducted.

Defence Minister Moshe Yaalon said Goldin was a relative of his. “He and other soldiers who fell embarked on the campaign to restore quiet and security to Israel.”

The Israeli Ambassador to the United States, Ron Dermer, said three dozen tunnels had been unearthed and destroyed and “we are finishing up de-commissioning these tunnels”.

“We hope that that job will be completed in a matter of hours, not days,” he said on NBC’s “Meet the Press”.