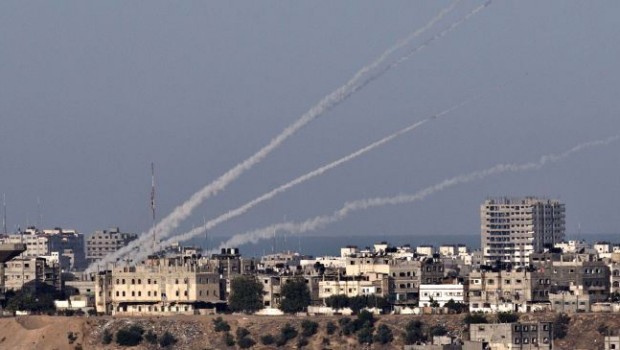 A file photo shows rockets being fired from the besieged Gaza Strip into Israel.

Palestinian resistance fighters continue firing rockets into Israel in retaliation for the deadly aerial and ground attacks on the besieged Gaza Strip.

On Sunday, a fresh barrage of rockets fired from Gaza hit Israel’s Sdot Negev, Nahal Oz and Alumim, while a mortar shell exploded in Eshkol.

Rocket alarm sirens have blared in several areas of Israel’s Hof Ashkelon, and Eshkol and the Sha’ar HaNegev region were under Code Red missile alert.

This is while Israel’s Tourism Minister Uzi Landau has said that the military’s power is diminishing dramatically and that it has failed to break Hamas.

Separately, an Israeli soldier has been wounded by sniper fire in northern Gaza and transferred to Tel HaShomer.

The army says at least 64 soldiers have died since July 8. Palestinian resistance groups have disputed the number, saying the causalities are much higher.

The developments come as Israel’s aerial and ground attacks on the besieged Gaza Strip continue relentlessly for the 27th consecutive day, causing more deaths and destruction. Nearly 50 people have been killed in Israel’s attacks so far today.

A UN school sheltering displaced Palestinians in the southern town of Rafah was hit on Sunday, leaving 11 people dead and 30 injured.

Earlier today, airstrikes claimed the lives of at least 33 Palestinians, including several children. Ten of the victims who were members of the same family were killed in Rafah.

Thousands of people have staged demonstrations in different countries in protest against the ongoing Israeli military aggression against Palestinians in the blockaded Gaza Strip.