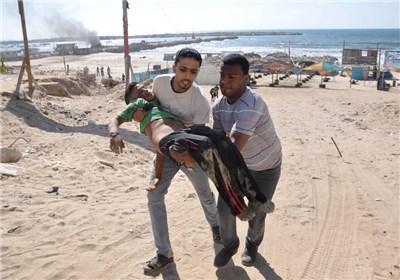 TEHRAN (Tasnim) – Hundreds of Iranian journalists have signed a letter to announce their decision to travel to the Gaza Strip in a bid to reflect to the world the oppression of Palestinians and atrocities committed by the Zionist regime against people in the Gaza Strip.

More than 400 Iranian journalists and media activists have signed the letter in which they have slammed the international community and those who claim to defend human rights for their “shameful” silence on Israeli massacres.

They have also criticized the Arab countries for their inaction and indifference to Gaza incidents.

International calls for an end to the bloodshed in Palestine intensified after Israel’s shelling on Wednesday of UN-run school in Gaza’s Jabalya refugee camp that killed 15 people. It was the second time that the Israeli military targeted UN-run schools in less than a week. The schools are seen as the only shelters for the Palestinians living in the blockaded territory.

Israeli warplanes have been pounding numerous sites in the Gaza Strip since July 8, followed by a ground offensive against the impoverished Palestinian land ten days later.

Palestine’s health ministry said on Sunday that at least 1,712 Palestinians have been killed since Israel launched its offensive. This number included 398 children, 207 women and 74 old people,