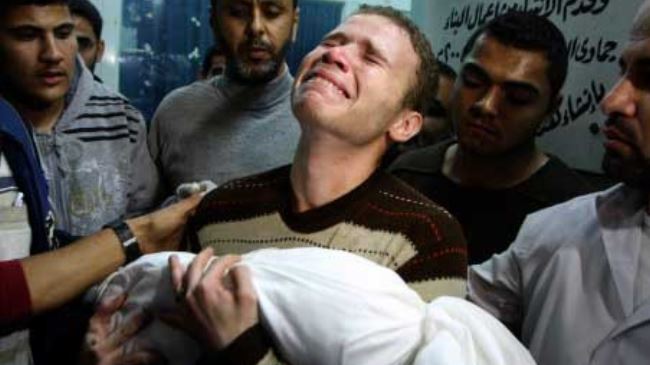 A Palestinian father holds the body of his son killed in an Israeli air raid on Gaza. (File photo

Latest figures show the ongoing Israeli air and ground strikes have claimed the lives of more than 350 children across the besieged Gaza Strip over the past weeks.

Palestinian Health Ministry sources say the children were killed since the beginning of the Israeli offensive against the Palestinian coastal enclave on July 8. Children also make up one third of over 9,000 wounded Palestinians.

The developments come as Israel continues with its relentless onslaught on the Gaza Strip.

The fresh series of attacks intensified after it was reported that an Israeli soldier had been captured by Palestinian resistance fighters in Gaza.

Several Palestinians lost their lives in Israeli attacks on Khan Yunis and a camp in central Gaza.

Palestinian officials say more than 150 airstrikes have hit Gaza, including one against the Islamic University in Gaza City.

At least 1,700 Palestinians have been killed and over 9,000 injured since the beginning of the aggression nearly four weeks ago.

The Israeli army has reportedly cut off the Rafah area to conduct a search operation for the missing Second Lieutenant Hadar Goldin. British media have reported that Goldin is a cousin of Israeli Minister of Military Affairs Moshe Ya’alon.

He said Israel tried to use the ceasefire to further infiltrate into Gaza and the resistance fighters only defended their land.

The Hamas spokesman also underlined that the Israeli aggression against civilians indicates its defeat.

Abu Zuhri made a lasting truce conditional on Israel’s ending its aggression against Gaza and lifting the siege of the territory.