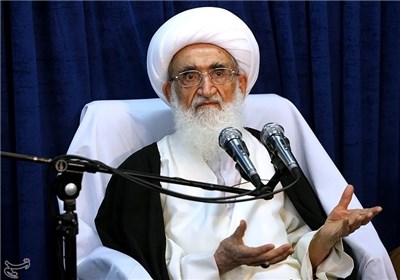 TEHRAN (Tasnim) – A senior Iranian cleric said security will not prevail in the Middle East region as long as the Zionist regime of Israel is in place.

“The crimes committed by the Israeli regime which murders children are so disgusting and abhorrent that have revealed the true nature of this blood-thirsty regime and proved that security in this region will not be provided without the annihilation of Israel,” said Grand Ayatollah Hossein Nouri Hamedani in a message, reacting to Israel’s offensive against the Gaza Strip.

He also praised the resistance of Palestinians in the face of harsh Israeli attacks and condemned the US government’s support for Israel.

In relevant comments in July, Supreme Leader of the Islamic Revolution Ayatollah Seyed Ali Khamenei referred to late founder of the Islamic Republic Imam Khomeini’s historic statement saying Israeli regime must be destroyed, reiterating that the destruction of Israel does not mean obliteration of Jewish people in the region.

Iran has already presented a practical solution to tackle the problem, the Leader noted.

“Based on the solution accepted by nations, all the people who live in and come from the region, will vote in a referendum, to choose their desired government and through such referendum, the usurping fake regime of Israel will be eliminated,” said Ayatollah Khamenei.

Also on August 1, Tehran’s Provisional Friday Prayers Leader Ayatollah Mohammad Ali Movahedi Kermani cautioned Israel that its ongoing atrocities against people of Palestine will not remain unanswered, and told the Tel Aviv regime to await a burst of anger that would terminate its crimes.

Israel “should know that patience has limits and will be lost one day and then, the best destiny for that slaughtering regime will be death,” the cleric underlined.

These follow 26 days of harsh Israeli offensive on the Gaza Strip, where more than 1,600 Palestinians have been killed and nearly 9,000 others have been injured.