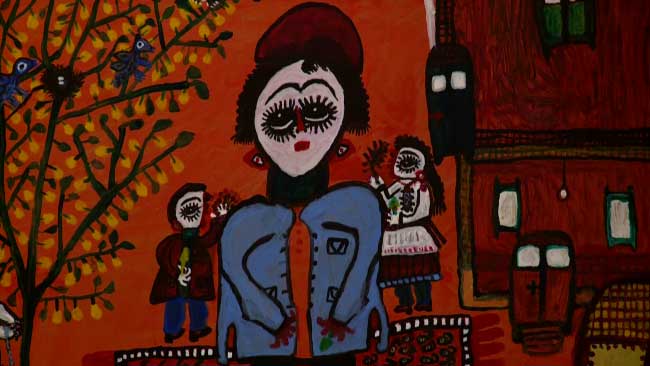 A collection of paintings created by the Iranian female artist Monavvar Ramezani has been showcased in a gallery in Tehran.

The exhibition hosted a selection of traditional paintings of the heuristic painter ‘Nane Hassan’ at Tehran’s Shirin Gallery on August 1, 2014.

Well-known as ‘Nane Hassan’, Ramezani is an Iranian self-taught painter with no formal art training, who has been involved in the art of weaving rugs and drawing rug patterns from her childhood.

Born in 1937 in Zanjan Province, the artist’s style is primitive though deeply meaningful that have been inspired from Persian tales, myths, stories, poems, traditions and legends.

‘Nane Hassan’ has experienced painting professionally since six years ago. Her life was granted much learning and ancient traditions inherited from her ancestors.

Her works are full of rhythms and repeated motifs with various colors that liken her paintings to carpet.

Died in 2005, Mokarrameh Qanbari was another Iranian heuristic woman painter whose works were displayed in many international galleries.

Qanbari was chosen as the woman of the year by the Iranian Women’s Studies Foundation (IWSF) and the University of Stockholm in 2001.