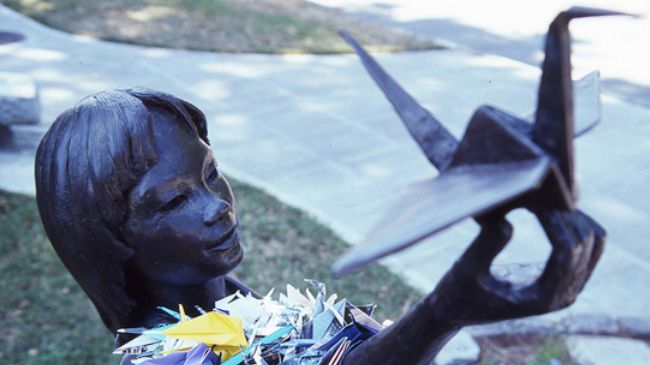 The paper crane as a symbol of peace, remembering the story of Sadako

Five Iranian screen productions are slated to take part in the 15th edition of Hiroshima International Animation Festival in Japan.

Gilane by Rakhshan Bani-Etemad, The Bonus for the Silence by Maziar Miri, Track 143 Narges Abyar and Night Bus by Kioumars Pourahmad and All Alone By Ehsan Abdipour entered the 2014 Hiroshima festival’s lineup.

The winners of the festival are scheduled to be honored with the Japanese symbol of peace, the Paper Crane.

The Paper Crane remembers the story of Sadako Sasaki who was diagnosed with leukemia at the age of 11 due to result of the radiation from the atomic bomb in Hiroshima when she was two.

According to the traditional Japanese belief, the paper crane is a symbol of luck; based on the belief, Sadako spent her time in a nursing home creating origami cranes in hope of making a thousand of them to be granted a wish.

While Sadako made only 644 cranes in seeking her wish of living, she met her death in October, 1955. After Sadako’s tragedy, the paper crane was popularized as a peace symbol.

Japanese peace representative Masahiro Sasaki, the elder brother of Sadako came to Iran to dedicate the symbol to the 2013 Festival of Films for Children and Young Adults held in Isfahan.

Iranian children’s director Sirous Hassanpour is also planning to produce his new project based on Sadako’s story occurred in Hiroshima and the chemical attack on the Iranian town of Sardasht, during Iran-Iraq war in 1987.

The festival is held under the spirit of love and peace as a project commemorating the anniversary of Hiroshima atomic bombing conducted by the United States during the final stages of World War II in August 1945.