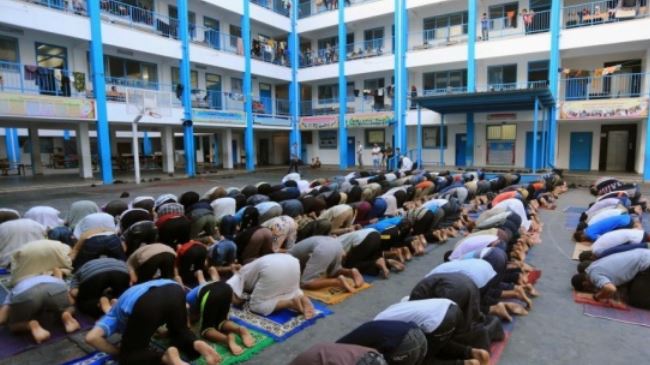 People in the besieged Gaza Strip have celebrated Eid al-Fitr, which marks the end of the fasting month of Ramadan, amid deadly Israeli attacks on the enclave, Press TV reports.

People of Gaza observed the holy month of Ramadan amid bombs, blood and deaths. A temporary humanitarian ceasefire gave them the chance to mark the end of it on Monday. Israel’s onslaught, however, robbed Gazans of their chance for holding a happy festival. Many families have lost one or more of their loved ones.

Some families, however, chose to celebrate the special occasion with those killed in the Israeli attacks, even in their graves. The families, however, could not find the exact place where they had buried their relatives as the Israelis bombard even the cemeteries. The first day of the month of Shawwal on the lunar calendar is called Eid al-Fitr which is decided when the first crescent of a new moon is sighted. Since July 8, Israeli warplanes have been pounding numerous sites in the Gaza Strip, demolishing houses and burying families in the rubble.

Israeli tanks also began a ground offensive against the impoverished Palestinian land on July 17. Palestinian medics say more than 1,095 Palestinians have been killed so far in the Israeli attacks and over 6,500 others injured. Gaza has been blockaded by the Israeli regime since June 2007, a situation that has caused a decline in the standards of living, unprecedented levels of unemployment, and unrelenting poverty. The apartheid regime of Israel denies about 1.8 million people in Gaza their basic rights.