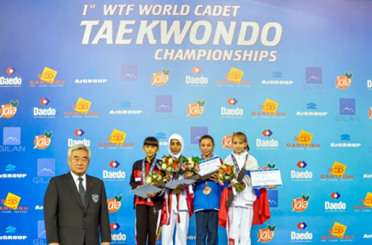 TEHRAN, July 28 (MNA) – Iran has clinched both the overall male and female titles at the

On the fourth and final day of the 1st WTF World Cadet Taekwondo Championships, Croatia’s Kristina Cerina brushed aside a stiff challenge from Iran’s Zahra Shojaei Rad to win the female -59kg final match 21-12 for the gold medal. The bronze was shared by the Great Britain’s Simone Abley and Chinese Taipei’s Yen Hsin Yeh.

In the male -65kg final match, Korea’s Myeong-gyun Byun defeated Iran’s Mohammad Amin Pouladi with a referee-stop-contest victory at 15-5 in the third round for the gold medal. The bronze went to Egypt’s Ahmad Mohamed and Denmark’s Wassim El-Jilali.

In the male +65kg final match, Iran’s Amirhossein Voghouei Azar defeated Kazakhstan’s Nartay Urazbayev with a referee-stop-contest victory at 32-7 in the second round for the gold medal.