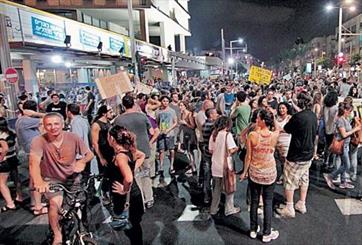 Israelis rally in Tel Aviv to condemn attacks on Gazans

TEHRAN, July 27 (MNA) – Thousands of Israelis have taken to the streets in Tel Aviv to condemn the recent attacks upon Gazans that have killed over thousands and wounded more than 6,000.

5,000 anti-war activists took into streets to participate the protest carrying banners reading ‘End the Occupation’ and ‘Stop the Massacre in Gaza’, ‘Bury the rifles, not the children’, ‘Enough killing’

Demonstrators censured Israeli officials for what they called dragging Israel into repeated wars and military conflicts; at least four demonstrators were arrested after they tried to block a nearby street.

In Canada cities of Ottawa and Toronto protesters also took to the streets to criticize Israel for its attacks against Gaza. In European cities of London, Paris, and Edinburgh same rallies were held.

Israel has started a huge waves of attacks against the people who live in the besieged Gaza Strip since July 8 and nearly 1,200 people, mostly women and children, were killed and more than 6,000 wounded so far.