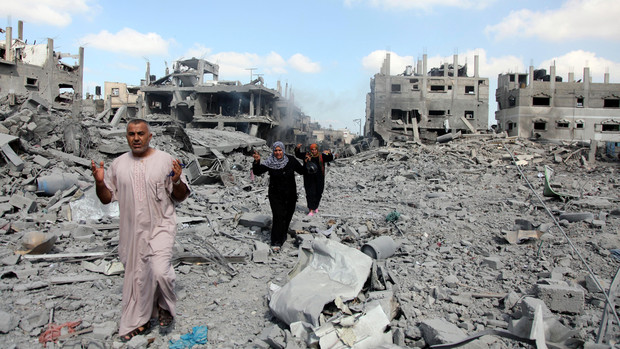 Photographer: by Ezz Zanoun/Anadolu Agency via Getty Images
Palestinians try to find their belongings amongst the debris of buildings during a cease-fire in Beit Hanoun, Gaza, on July 26, 2014.

Israeli ministers agreed to extend a 12-hour truce with Hamas by four hours even as the army said the country was targeted anew by mortar fire from Gaza.

The United Nations had asked Israelto extend the humanitarian cease-fire for 24 hours and the security cabinet agreed to four extra hours as a first stage. Ministers will meet later today to discuss a further extension, the Israeli official said, declining to be identified because of the sensitivity of the matter. Foreign Minister Avigdor Liberman said on Channel Two he wouldn’t support extending the truce any longer than the four hours.

The extension came after world leaders met in Paris to seek an end to fighting that has left more than 1,000 people dead. Israel’s army said three mortar shells fired from Gaza hit southern Israel after the 12-hour truce ended. Police said the shells landed in open areas, with no damage or injuries.

“We want to achieve a durable, negotiated cease-fire which addresses Israel’s needs for security and Palestinian needs for social and economic development and access for the territory of Gaza,” French Foreign Minister Laurent Fabius said after the meeting in Paris.

The truce extension was sought after neither side agreed to U.S. Secretary of State John Kerry’s plan for a weeklong cease-fire — during which talks on a durable settlement could begin. Israel says its offensive aims to end the barrage of rockets fired at its towns from Gaza and destroy tunnels used by the territory’s Hamas rulers to launch attacks inside Israel. Hamas says the economic embargo on Gaza must end as part of any deal.

Hamas and Israel have been observing a humanitarian cease-fire since 8 a.m. today even as Israel said it continues to work to “locate and neutralize” tunnels. Hamas is considered a terrorist group by the U.S., the European Union and Israel.

As Gazans picked through the rubble of buildings destroyed in air strikes, 130 bodies were discovered, bringing the total number of Palestinian deaths in three weeks of fighting to 1,030, Gaza health officials said.

Two Israeli civilians and 40 soldiers have been killed since violence escalated July 8. Protests spread to the West Bank on July 24, and several Palestinian demonstrators were killed in clashes with Israeli security forces.

The latest Gaza conflict, the third in six years, deepened last week when the Israeli military added to its air bombardment by sending troops into the territory. Israeli financial markets have been mostly unaffected, with the benchmark stock index little changed, and the shekel approaching a three-year high.