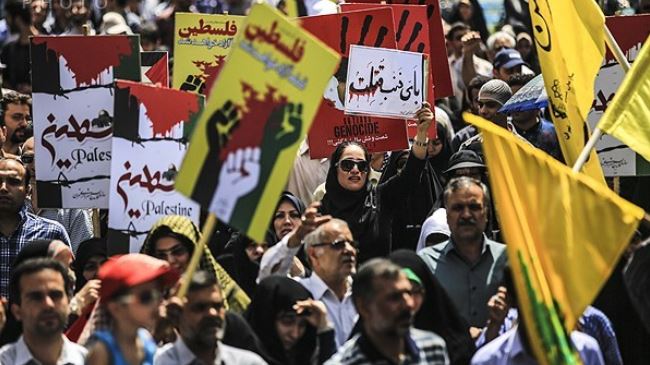 Many Iranian cineastes have expressed their criticism over the world’s silence on the ongoing Israeli war crimes in Gaza Strip.

The artists announced their protest by attending a meeting titled “Gaza Is Not Alone” held at the Art Forum in the capital city of Tehran.

“Anybody who sees the pictures of the massacre in Gaza and keeps silent is not a human being. We are here to prove cineastes will not remain silent over the crimes happening in Gaza,” said the filmmaker Kamal Tabrizi.

Furthermore, a large group of cineastes attended the International Quds Day demonstration in Tehran on Friday to show their support for the oppressed Palestinian people.

People in different countries held massive rallies on Friday in solidarity with the oppressed Palestinian nation, voicing their anger at the policies of the Israeli regime and its allies.

More than 800 people have so far been killed and over 5,000 others wounded since the Israeli military first launched its offensive on the Palestinian enclave on July 8.

The UN said in a report on July 23 on the ongoing Israeli aerial and ground assaults on the impoverished Gaza Strip have claimed the life of at least one Palestinian child every hour over the past couple of days.