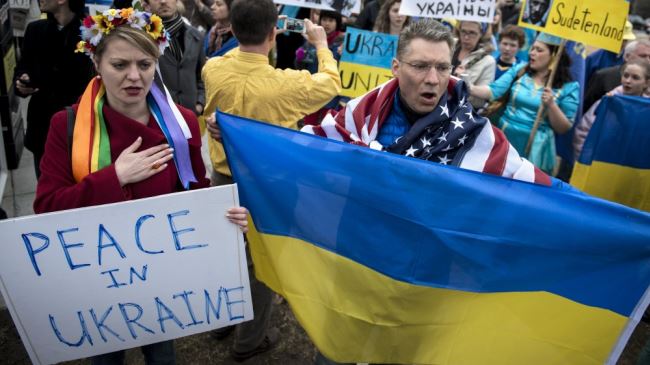 EU would side with US, not Russia: Fred Weir

Press TV has conducted an interview with Fred Weir, a journalist and political commentator, from Moscow, to discuss the situation between Russia, the European Union and the United States.

Press TV: Tell us about the situation here. It seems that the pressure is on, that Washington does not plan on backing down and now we have even added sanctions. Are you surprised by this move, one. And two, what is the goal of increasing sanctions on Russia?

Weir: There is some discussion about that. Here in Russia they increasingly do think that the goal is basically to keep the squeeze on Russia, to isolate it progressively until there is regime change in Russia. That does seem to be a growing opinion.

Certainly in circles around Vladimir Putin, this is what they start to think, that there is nothing they could do about Ukraine, there are no steps they could take because in recent months or so Russia has taken quite a few steps in the direction in deescalating the situation, removing the alleged threat of a Russian invasion. They did a lot of things and all that has happened is an increase in sanctions.

I think that what has focused minds on all sides is this terrible airline disaster. The Russian point of view about that is that nothing is proven yet. There are no conclusions from an investigation.

Yet this tragedy is being used politically to press for deeper, wider sanctions regime against Russia. There are all the sanctions that you’ve mentioned. There have been three full waves and the European Union is contemplating a next wave which it will decide upon next week, which will bit quite deeply in fact if it is passed in its full force.

Press TV: When you’re talking about the EU, though, there’s a big difference with the EU and implementing sanctions and Washington, is there not? –Because of the business interaction, actually the amount of interaction between Russia and the EU is a lot more than it would be Moscow and Washington. Is not the European Union afraid of repercussions on itself?

There are strong ties between big leading European corporations and Russian ones. There are a few joint ventures, for instance like Volkswagen assembles cars here in Russia. So, the European Union has a great deal more to lose than the United States.

On the other hand, the pressure from the United States has grown. That airline disaster has certainly added a highly emotional edge to it, which is just undeniable.

I think this is what is coming down now. There will be a fight – obviously there is quite a lot of contention within the European Union about this new round of sanctions, but we’ll know by the end of the coming week whether Europe is going to go down that road alongside the United States.