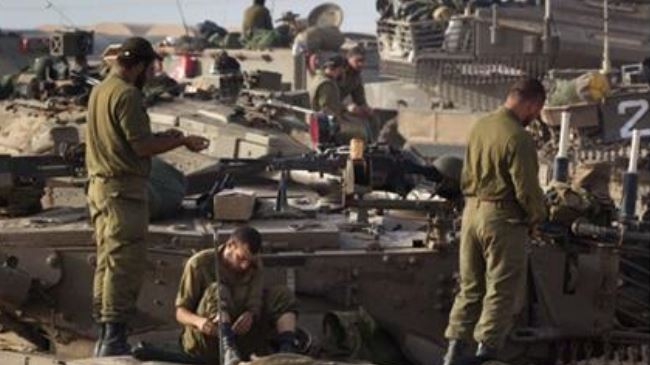 Dozens of Israeli reservists have refused to join the army, signing a petition to condemn the Tel Aviv regime’s crimes against civilians in the besieged Gaza Strip.

Israeli military sources say at least 50 members of the Israeli reservists list, which consists of ex-soldiers,  signed the petition.

They have strongly slammed the current brutal military operation taking place in their name in the besieged Palestinian enclave.

The petition also criticizes the militarization of Israel and the army’s discriminatory policies, especially against women and Jews whose families originate in Arab countries.

The signatories say in Israel, war replaces politics and the cabinet is not able to think about a solution to a political conflict except in terms of physical might, so there is no wonder that it is prone to never-ending cycles of mortal violence.

The developments come as at least one more Israeli soldier has been killed by a shell fired from the Gaza Strip. The Israeli army says the soldier was killed near the besieged territory.

The latest fatality brings to 43 the number of Israeli troops killed since Tel Aviv started its offensive in the Gaza Strip on July 8.

This is seen as the heaviest loss of life for the Israeli military in years. But according to Palestinian fighters, the death toll is much higher.

The Palestinian resistance movement Hamas say over 90 Israeli forces have been killed in confrontation with Israel. Based on Israeli media reports, at least 126 soldiers are in hospital, one of them in critical condition.

The Palestinian death toll from three weeks of Israeli strikes has reached about 1,052 and at least 6,000 Palestinians have been injured in the onslaught.

The UN Human Rights Council has recently passed a resolution calling for an independent probe into Israel’s war crimes in Gaza.