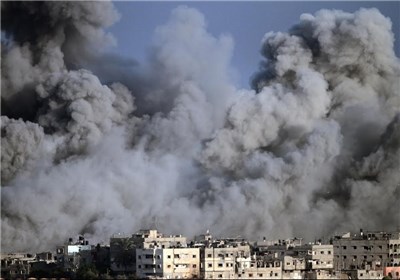 TEHRAN (Tasnim) – Health ministry officials in the Gaza Strip announced that the death toll from 20 days of Israeli onslaught on Palestinians has hit 1,147 with nearly 6,000 others reported injured.

1,147 Palestinians, mostly civilians, have been martyred during days of Israeli offensive, as 43 Israeli soldiers have been killed, Al Mayadeen TV channel reported on Sunday.

According to the report, nearly 6,000 Palestinians have been wounded and at least 200 Israelis, over 150 of whom were soldiers taking part in the Gaza ground offensive, were also wounded.

The bodies of dozens of Palestinians were pulled from the ruins of bombed-out homes in Gaza on Saturday during a brief humanitarian truce that top diplomats meeting in Paris urged Israel and Hamas to extend.

Ashraf al-Qudra, Palestinian emergency services spokesman, said on Saturday that 76 bodies had been brought to hospitals in north, central and southern Gaza, as well as Gaza City, and that the toll was expected to rise further.