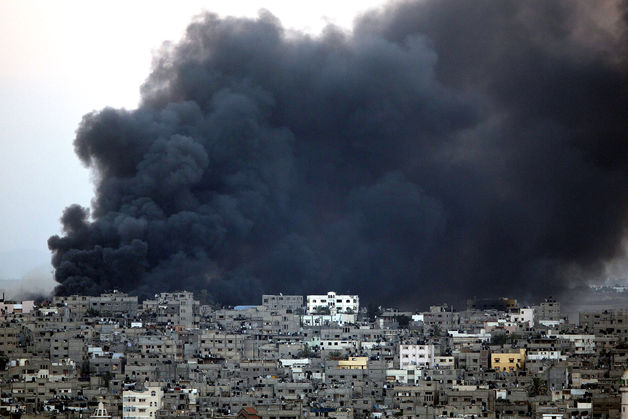 Photographer: Mahmud Hams/AFP via Getty Images
Smoke billows from a building hit by an Israeli air strike in Gaza City on July 25, 2014.

A 12-hour cease-fire between Israel and Hamas was holding, bolstering U.S. Secretary of State John Kerry’s effort to bring an end to the conflict in Gaza that has killed almost 1,000 people.

The initial pause would help build a possible week-long truce for the Muslim festival of Eid that marks the end of the fasting month of Ramadan, Kerry said in Cairo yesterday. Israeli premier Benjamin Netanyahu “has indicated his willingness to do that as a good-faith down payment to move forward,” Kerry told journalists.

Hamas, the Islamist organization that rules Gaza, agreed to a humanitarian cease-fire starting at 7 a.m. local time today, according to pro-Hamas TV station al-Aqsa. Israelis Army said it would halt its fire from 8 a.m. to 8 p.m. while continuing work to “locate and neutralize” tunnels in Gaza it says can be used by Hamas to strike Israel.

Neither side has agreed to Kerry’s plan for a week-long cease-fire during which talks on a durable settlement can get under way. While the “basic outline” has been accepted on all sides, Kerry said, there are still problems of “terminology and context of the framework.” He’ll continue the pursuit of a truce today from Paris, where foreign ministers from European Union nations and Hamas allies Qatar and Turkey are due to join negotiations.

The conflict between Israel and Hamas has left more than 900 Palestinians dead, according to the Palestinian Wafa news agency. Two Israeli civilians and 37 soldiers have been killed since the violence escalated on July 8. There have been earlier humanitarian pauses during that period, for injured people to be moved or civilians to replenish supplies. Protests spread to the West Bank late on July 24, and several Palestinian demonstrators were killed in clashes with Israeli security forces.

Channel 2 and other Israeli media said that ministers at a security cabinet meeting late yesterday weren’t satisfied with the latest shape of Kerry’s broader plan. Kerry, at the press conference, said no formal proposals have been submitted, and declined to disclose the sticking points.

The Ynet news website reported, without saying where it got the information, that during a 12-hour halt Israel will continue to destroy tunnels used by Hamas militants to launch raids into the Jewish state but won’t initiate fire. It also cited Defense Minister Moshe Ya’alon as telling the army to be ready to “significantly expand the ground offensive in Gaza very soon.”

Israel says its military offensive aims to end the barrage of rockets fired at its towns from Gaza, and destroy the tunnels. Hamas says the economic embargo on its territory must end as part of any accord. Egypt, which has mediated in past conflicts, is working with Kerry to broker a deal.

Israel, like the U.S. and European Union, classifies Hamas as a terrorist organization.

Some of the biggest protests in years have broken out in the West Bank in sympathy with the people of Gaza. The West Bank is controlled by the Palestinian Fatah group, which recently reconciled with Hamas after a seven-year rift.

Palestinian officials said at least six protesters have been killed in clashes with security forces in Hebron, Nablus and the Qalandia checkpoint with tires burned and rocks hurled at border guards, according to Israeli news service Ynet. Israeli police have confirmed one death.

The latest Gaza conflict, the third in six years, deepened last week when the Israeli military added to its air bombardment by sending troops into the territory. Israeli financial markets have been mostly unaffected, with the benchmark stock index little changed since fighting escalated on July 8, and the shekel approaching a three-year high.

The Israeli army yesterday added Sergeant Oron Shaul to the list of those killed in action. Hamas had previously claimed it had captured the solder. Palestinian health officials say most of their dead are civilians, while more than 5,800 people have been injured.