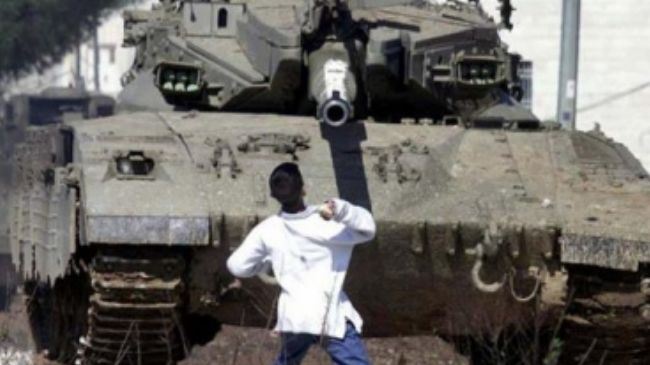 A Palestinian boy throwing a stone at an Israeli tank in the Occupied Territories (file photo).

Press TV has conducted an interview with Scott Rickard, a former American intelligence linguist, from Orlando, to discuss the ongoing genocide in Palestine at the hands of the Israeli entity.

Press TV: The Iranian president made quite a strong statement, calling what’s happening in Gaza a genocide. How do you feel about that?

Rickard: That’s exactly right. This is a genocide. This is ethnic cleansing of the indigenous people of Palestine. It’s been going on, unfortunately, for over half a century.

They’ve increased the size of the bombs they’re dropping. They’re dropping hundreds of bombs at a time that are 2,000 pound bombs and larger. These are not accurate bombs. These bombs are basically resulting in massive amounts of innocent civilians and innocent people there.

They’re basically trying to wipe out the entire Gaza infrastructure and reoccupy Gaza. What they’ve done at this point is they’ve tried to do some ground incursions and they’re losing that battle.

Thankfully the resistance – I like what Rouhani said about supporting the resistance. I have to be a bit critical about spouting things like hate and anger. These aren’t the things that are going to help win this. Hate and anger are very weak emotions that people basically will rise above eventually, but unfortunately it will keep them in the downfalls of the international community.

I think it’s important that we all talk intelligently about this and we get the word out as thankfully Press TV is doing and Rouhani did during his speech.

Press TV: I wanted to ask about that, once it’s labeled a genocide and now as the Iranian president said, history will judge those who did not stand on the right side when it comes to this. How do you feel about that? -Because certainly when it came to the Nazis, for example, people who supported the Nazis at that time are still being chased till today.

And certainly those same war criminals in Iraq, Afghanistan, throughout Syria that is being caused, Libya, there are just numerous people where misinformation of history is being written in favor of the individuals that are indoctrinating the people of the West.

This has been going on for some time. The encyclopedia Britannica is a fantastic representation of the brainwashing of the West by the British Empire. Certainly the newspapers and television are unfortunately brainwashing the West.

It’s horrific to see them abusing their power of the border crossing and not allowing humanitarian aid to go in and help these defenseless individuals who are just being slaughtered on daily basis.