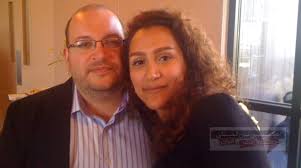 An Iran judiciary official has confirmed the arrest of Jason Rezaian, The Washington Post’s correspondent in Tehran.

Rezaian was detained on Thursday with his wife, Yeganeh Salehi, and two freelance journalists.

The head of the judiciary’s Tehran Province Office, Gholam Hossein Esmaeili, gave no details of charges, saying, “The probe into the case is still in the preliminary stage, and information on that can be made public [only] after technical investigations and interrogation.”

Esmaeili declared, “The security forces are in full command of the country and monitor all enemy moves,” saying they will not allow “the enemy and its lackeys to throw their weight around” in Iran.

Hundreds of journalists, including several foreign correspondents, have been imprisoned in Iran since the disputed 2009 Presidential election.

Tehran Friday Prayers leader Ayatollah Ahmad Khatami used his sermon to call for weapons to be sent to Palestinians to fight Israel, “The West Bank should be armed like Gaza so that the hellish regime will be perished through the West Bank’s cooperation with Gaza.”

Khatami continued, “The only remedy is armed resistance, the resistance which has turned Tel Aviv to a ghost town and has made the Zionists’ day a dark, black night.”

Khatami’s message follows similar calls by the Supreme Leader and the military this week.

Ayatollah Khamenei told university students on Wednesday night, “Until the time this cold-blooded murderous regime is obliterated through the help of God, the only way to deal with this destructive regime is strong armed resistance.”

Gholam Ali Haddad-Adel, a member of the Supreme Leader’s inner circle, has repeated Ayatollah Khamenei’s linkage of the Gaza crisis with the “sedition” of mass protests after the disputed 2009 Presidential election in Iran.

Addressing a Quds Day rally in Palestine Square in Tehran, Haddad Adel said, “Those who chanted the slogan ‘Neither Gaza nor Lebanon, my life for Iran’” during the demonstrations challenging the regime were “inhumane”.

The Supreme Leader said on Wednesday that the Green Movement and other protesters “wanted to portray Iran as something else to the world” when they denounced the “victory” of Mahmoud Ahmadinejad and told the regime to concentrate on rights and justice at home rather than hypocritically proclaiming their defense of them abroad.