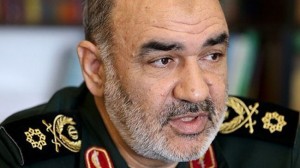 TEHRAN (Tasnim) – A senior commander of the Islamic Revolution Guards Corps (IRGC) praised growing capabilities of the Palestinian resistance groups in their confrontation with the Zionist regime of Israel, and stressed that there is no security for the Zionist regime any more.

“Today, no spot (in the occupied Palestinian lands) is secure (for the Zionist regime) any longer,” said IRGC lieutenant Commander Brigadier General Hossein Salami, who attended the massive rally in the Iranian capital of Tehran on the occasion of the International Quds Day on Friday.

“When they occupied Lebanon, Hezbollah (resistance movement) was born. (Moreover), the 33-day (2006), 22-day (2008-9), and 8-day (2012) wars led to the formation of resistance structures in the occupied lands and this process will put the final nails in the coffin of the Zionists.”

He added that the Zionist regime has lost its confidence in its military power and equipment as the resistance movement has achieved eternal victories.

The senior IRGC commander also referred to the Zionist atrocities in the Gaza Strip in the past few weeks and underscored that (with this latest Israeli onslaught against Gaza) Palestine will never stand still and that “the Muslim world will ultimately be the graveyard of the policies of the United States, Zionist regime and their reactionary allies”.

His comment came as almost 850 Palestinians have been killed, and over 5,200 other injured in the besieged enclave during the Israeli 18-day offensive on Gaza.

Since July 8, Israeli warplanes have been pounding numerous sites in the Gaza Strip, demolishing houses and burying families in the rubble. Israeli tanks also began a ground offensive against the impoverished Palestinian land on July 17.