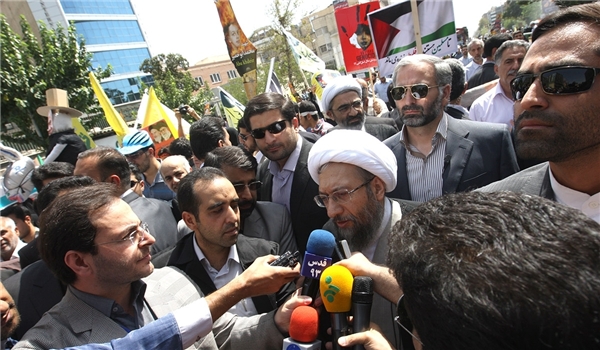 TEHRAN (FNA)- Iran’s Judiciary Chief Ayatollah Sadeq Amoli Larijani thanked the Iranian nation for their mass participation in the International Quds Day rallies in support of the innocent Palestinians who have been under Israeli attacks for the past 18 days.

“This year’s Quds Day rallies are being held under special conditions and the defenseless Gaza people are under the inhuman attacks of the Zionist regime,” Amoli Larijani told reporters in Tehran on Friday.

“The rallies have this very special message that our great nation has always pioneered in supporting the defenseless Palestinian people, and that the Palestinian and Gaza people aren’t defenseless and this raging flood will root out the Zionist regime soon,” he added.

Amoli Larijani said that those countries which have closed their eyes to the Israeli crimes against the Palestinians are accomplices to the regime.

Iranians across the country, including in the capital Tehran, alongside other people around the world held massive anti-Israel rallies on the last Friday of Ramadan in opposition to the continued occupation of Palestinian land by Israel and its fresh round of savage attacks against the people in the Gaza Strip.