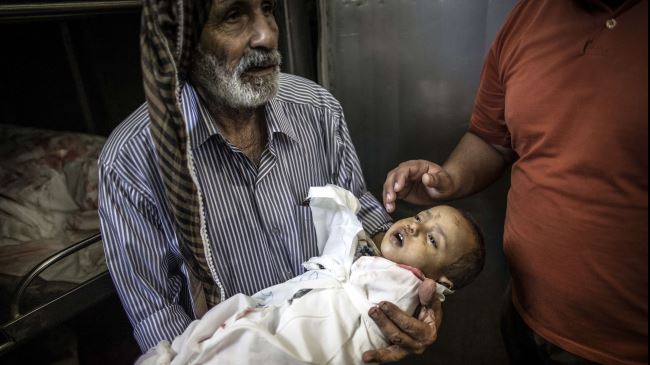 The death toll from more than two weeks of Israel’s relentless attacks on the besieged Gaza Strip has reached 805.

According to Palestinian authorities, a 26-year-old woman another aged 23, who was pregnant, were killed in an Israeli airstrike in the southern Gaza town of Deir-el-Balah on Friday.

Two other people, who were injured in an earlier attack in the city of Khan Yunis, also died of their injuries.

Israeli warplanes also destroyed the house of Salah Bardawil, a leader of Palestinian resistance movement Hamas, in the southern city.

Palestinian emergency services spokesman Ashraf al-Qudra said around 100 Palestinians were killed on Thursday, making it one of the bloodiest days of the Israeli onslaught on Gaza.

NGOs say Palestinian civilians, including a large number of women and children, comprise around 80 percent of total casualties.

Two Israelis and a Thai migrant worker were also killed; Israel’s military fatalities stand at 32 with one trooper missing.

More than 130 soldiers have been hospitalized, according to Israeli media.

Since July 8, Israeli warplanes have been pounding numerous sites in the Gaza Strip, demolishing houses and burying families in the rubble. Israeli tanks also began a ground offensive against the impoverished Palestinian land on July 17.

In response, Palestinian resistance fighters have continued to fire a barrage of rockets into the occupied Palestinian territories.

Many demonstrations have so far been held across the world in support of the Palestinians living in the blockaded strip.