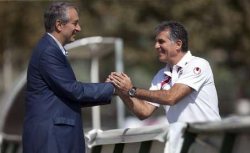 Contract with Queiroz to be signed in 10 days

Tehran, July 24, IRNA – President of Iranˈs Football Federation Ali Kaffashian said Thursday that a new contract with Carlos Queiroz will be signed within the next 10 days.

Kaffashian said that preliminary agreements have been made with Carlos Queiroz to manage Iran National team for an additional four-year time.

He said the new contract has not been signed yet because Queiroz has a contract until the end of July.

He added that Queiroz has agreed to use two Iranian assistants and reduce the number of his foreign aides.

According to Kaffashian, preparing Iranian national team for 2015 AFC Asian Cup as well as 2018 World Cup to be held in Russia is high on the agenda of the veteran Portuguese coach.