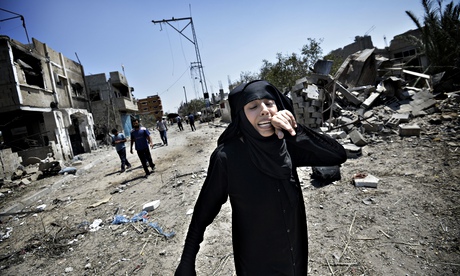 A woman in Zanna is overcome by the destruction in the village following heavy tank fire and air strikes over almost a week. Photograph: Harald Henden/VG

A short while after the Israeli tanks pulled back from Gaza’s frontline village of Zanna on Wednesday morning, residents returned to dig out the dead buried within the rubble of their homes, rescue their surviving livestock and see if their houses were still standing.

The village is the scene of some of the heaviest ground fighting of the 16-day conflict and marks the deepest point penetrated by Israeli armour and infantry. It has been too dangerous a place to enter for more than seven days.

In the first stage of the conflict, the village was pummelled with Israeli shelling and air strikes. More recently, it provided a theatre for fierce gun battles between Hamas and Israeli fighters.