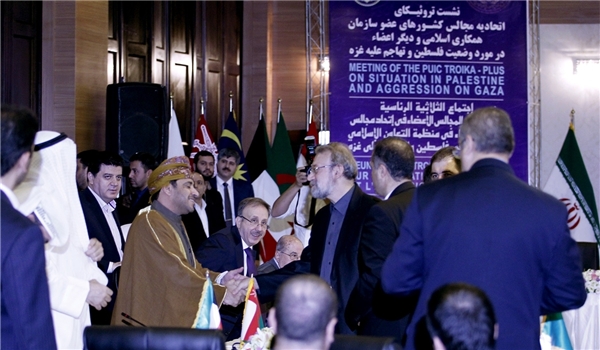 TEHRAN (FNA)- A troika meeting of the Parliamentary Union of Islamic Cooperation (PUIC) opened in Tehran on Tuesday to discuss ways to stop the Israeli massacre of the Palestinians in the Gaza Strip.

The PUIC troika meeting opened in the presence of seven parliament speakers from Iran, Mali, Sudan, Syria, Palestine, Qatar and Turkey as well as several parliamentary delegations from Kuwait, Lebanon, Pakistan and Oman.

Addressing the opening ceremony of the PUIC meeting, PUIC Secretary General Mahmoud Erol Kilic pointed to the massacre of the defenseless children and women in Gaza, and said, “Women and children are the main victims of these attacks and the Muslim Ummah should pay prime and main attention to the Palestinian cause as its main agenda.”

He noted that 19 lawmakers and 7 parliament speakers are attending the meeting, showing the importance of the event.

He urged the meeting to think of ways to put an immediate end to the massacre of the Gazans by the Israelis.

The PUIC Troika consists of the previous, current, and future presidents of the PUIC Conference, which is currently presided by Iran.

On July 14, Larijani held phone calls with his Malian and Sudanese counterparts Issaka Sidibé and Fatih Ezzedine al-Mansur as the previous and future chairmen of the PUIC Conference and called for emergency meeting of the PUIC Troika over deadly Israeli air raids on the blockaded Gaza Strip.

Reports say over 610 Palestinians have been killed and over 3,200 others wounded in Israeli attacks on the Gaza Strip over the past 15 days. Since July 8, Israel has struck more than 1,800 targets across Gaza, which is home to around 1.8 million Palestinians.