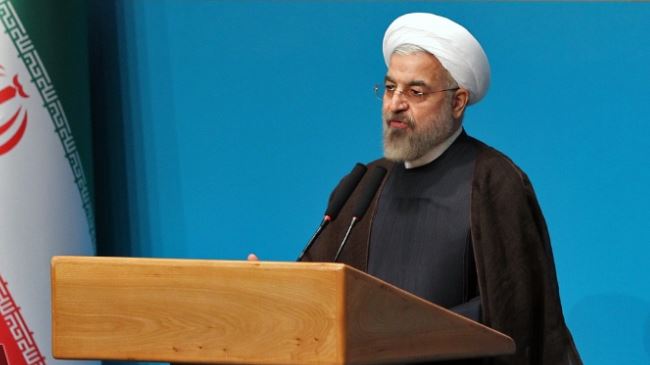 Iran’s President Hassan Rouhani delivering a speech at a meeting with Iranian athletes in Tehran on July 22, 2014.

Iranian President Hassan Rouhani emphasized that Iran would support the Palestinian people and all oppressed nations with full might.

Rouhani also said innocent Palestinian people in the Gaza Strip are exposed to the brutalities of the racist Zionist regime.

There are few wars in the world in which a small number of people with no or limited weaponry are under full siege and exposed to the barbarism of a racist group, Rouhani said in a meeting with Iranian athletes on Tuesday.

Unfortunately, Iran’s medical aid and teams are denied entry into the Gaza Strip, he added.

“We are ready to admit all the Palestinians injured in the blockaded Gaza Strip and treat them here [in Iran],” Rouhani said.

He added that the Israeli regime is striking the Gaza Strip with different weapons, tanks, artillery and missiles and is killing children, women and the elderly.

He expressed hope that Muslims and the Palestinians would achieve victory in their “unequal fight” against the Israeli regime, saying, “I have no doubt that aggressors will be defeated again and the oppressed people will achieve success.”

Latest reports say Israeli aerial raids and ground invasion of Gaza have killed more than 647 Palestinians, mostly women and children, and injured 4,000 others since July 8.