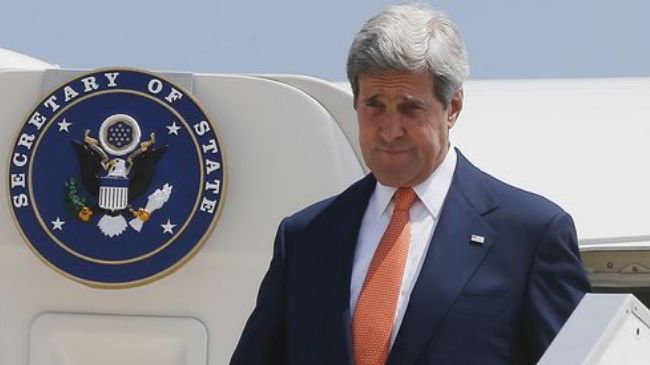 As the bloodshed against Palestinians continues in the Gaza Strip, US Secretary of State says there is still work to be done to find a truce.

“We have certainly made some steps forward, but there is still work to be done,” Kerry said in al-Quds (Jerusalem) on Wednesday as he met UN Secretary General Ban Ki-moon.

The top US diplomat flew into Israel’s main airport on Wednesday as part of a diplomatic drive over the situation in Gaza.

Kerry met with the US chief in Cairo on Tuesday before meeting him is Israel.

On Tuesday, Ban said it is his “hope and belief” that his emergency mission to the Middle East will lead to an end to the fighting “in the very near future.”

He added that he could not publicly reveal details “at this highly sensitive moment.”

More than 640 Palestinians have died and more than 4,000 others injured since Tel Aviv unleashed its offensive on July 8.

Palestinian resistance fighters have also retaliated against the deadly Israeli attacks by firing a barrage of rockets deep into the Israeli-occupied Palestinian territories.