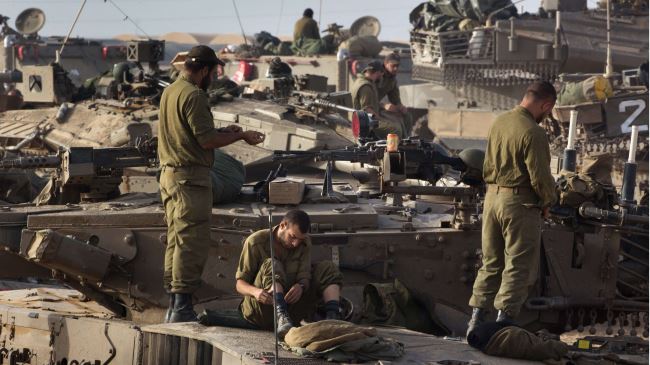 Israeli soldiers work on their Merkava tanks area near the border with the Gaza Strip, July 12, 2014.

An Israeli rabbi has issued a ruling that allows the killing of innocent civilians in the besieged Gaza Strip.

Dov Lior, an Israeli rabbi from the illegal settlement of Kiryat Arba in the occupied West Bank, said in the ruling that it is “okay” to kill innocent civilians and destroy Gaza.

The ruling also says that it is not necessary to check if the people targeted are civilians or non-civilians.

The rabbi’s ruling authorizes all means of targeting the people, such as “denying supplies or electricity.” He further says military forces are allowed “to bomb the whole area according to the discretion of the army…”

“In the case of Gaza,” the rabbi said, the Israeli military officials “will be allowed to instruct even the destruction of Gaza.”

He also said that, as the Israeli army is at war with the people in the blockaded enclave, “any kind of talk about humanism and consideration are moot.”

The rabbi has been chosen by thousands of Israelis, who follow him.

Israel unleashed its offensive on the Gaza Strip on July 8. Over the past 15 days, Israeli warplanes have been hitting numerous sites in the Gaza Strip, demolishing houses and burying families in the rubble. Israel also began a ground offensive against the impoverished enclave on July 17.

At least 647 Palestinians, mostly women and children, have been killed and more than 4,000 others injured in Israel’s attacks during the past 15 days.

According to Israeli sources, around 30 Israelis have also been killed in the war. Palestinian resistance movement Hamas puts the number at 40.