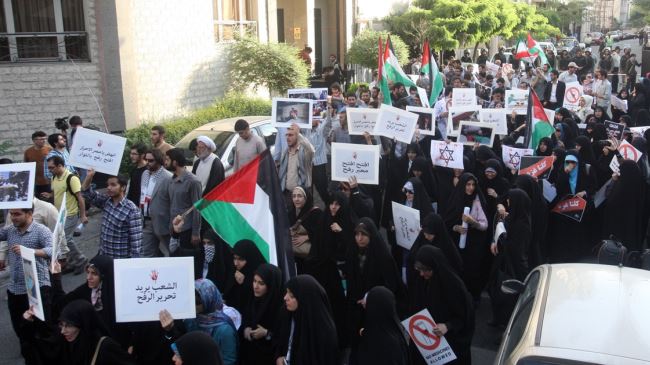 A rally has been held outside the Egyptian Interests Section in Tehran to protest Cairo’s move to close the Rafah border crossing in Gaza.

They said Egypt’s decision to prevent the delivery of essential supplies to the besieged Gaza Strip amounts to connivance with the Israeli regime.

Egypt has also refused to allow Palestinians injured in the Israeli brutal attacks to enter the country through the Rafah border crossing and also denied medical teams entry into Gaza.

At the end of the rally, the demonstrators issued a statement, saying the Israeli regime is committing war crimes by killing the oppressed people in Gaza, including women and children.

Western powers, particularly the US, and international bodies are giving a green light to the Israeli regime to carry out such heinous and savage crimes, the statement read.

It expressed regret that Muslim and Arab countries are involved in political conflicts and trivial matters, and have so far adopted no effective measure to support the Palestinians.

Earlier on Tuesday, Iran’s Foreign Minister Mohammad Javad Zarif called on the international community, the UN Security Council and the United Nations High Commissioner for Refugees (UNHCR), to help put an immediate end to Israel’s aggression and lift the blockade on Gaza and open the Rafah border crossing .

Latest reports say Israeli aerial raids and ground invasion of Gaza have killed more than 647 Palestinians, mostly women and children, and injured 4,000 others so far.