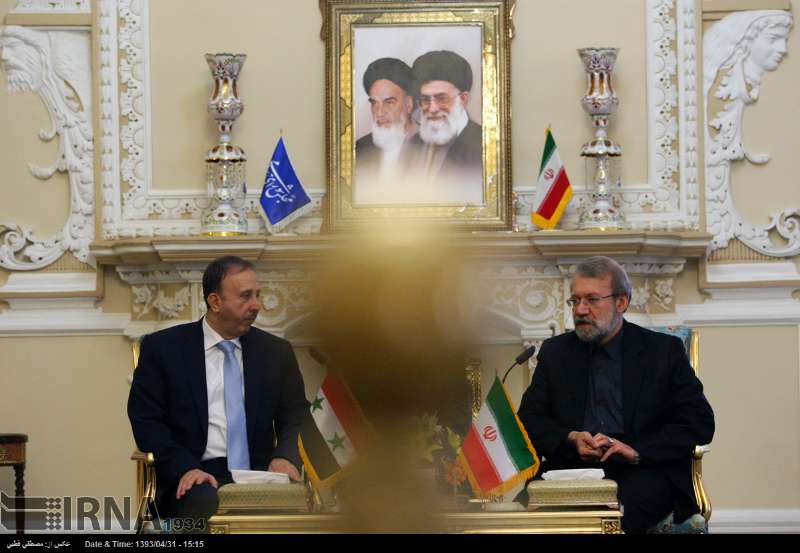 Larijani made the remarks in a meeting with Syrian Parliament Speaker Mohammad Jihad al-Laham in Tehran on Tuesday.

Syria is one of the significant pillars of resistance against the Zionist regime and for this reason all should admit the result of the countryˈs presidential election, Larijani said.

Larijani thanked his Syrian counterpart for his participation in the troika meeting of the Inter-Parliamentary Union of the Organization of the Islamic Cooperation.

The aim of Tehranˈs Troika meeting is to study current developments and situation in Gaza and support the oppressed Palestinian people.

Syria is one of the most important pillars of resistance against the Zionist regime and presence of the high ranking Syrian delegation is a proof of this claim, he said.

Larijani also congratulated President Bashar al-Assad for his rerlection to this post and said global powers should respect the votes of the Syrian people and stop their struggle with the Syrian nation.

He also admired the resistance of the Syrian people in their fight with terrorists and hoped for return of tranquility to the country.

The Syrian parliament speaker, for his part, welcomed the initiative taken by the Islamic Republic of Iran to host the troika meeting of the Inter-Parliamentary Union of the Organization of the Islamic Cooperation.

Iran spares no efforts to help world Muslims and always supports them any time and anywhere, he said.

He also thanked Tehran for its spiritual support for Syria and said the Syrian army and people will defeat terrorists in the near future and will give a lesson to western colonial powers and those backing terrorism in the region.

On current developments in Gaza, the Syrian parliament speaker said the Zionist regime made a miscalculation by assuming that the resistance front has been weakened and launching a brutal attack on th eoppressed people in Gaza but the Palestinians will be the final winner of this battle.