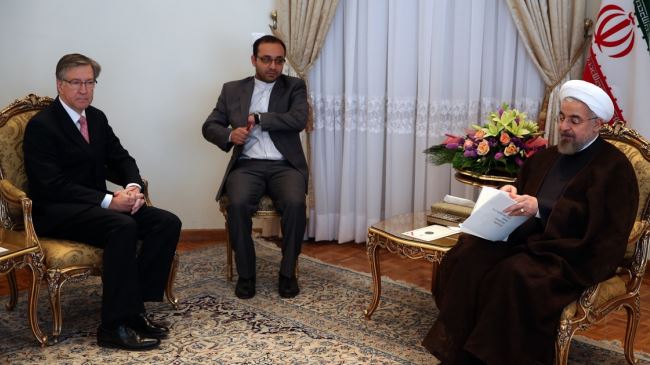 Iran’s President Hassan Rouhani says the Islamic Republic is optimistic that negotiations with the P5+1 group aimed at reaching a comprehensive deal on Tehran’s nuclear energy program will come to fruition.

“Dialog is the only way ahead of us, and we are hopeful about the success of the talks,” Rouhani said in a meeting with newly-appointed Iceland’s accredited  Ambassador to Tehran Gonar Pulsen on Tuesday.

“We are ready for cooperation within the framework of international regulations,” the Iranian president added.

He emphasized that the Iranian nation expects that it will enjoy its inalienable right to use nuclear technology for peaceful purposes.

The two sides sealed an interim deal in Geneva, Switzerland, on November 23, 2013, for a six-month period. The deal, which took effect on January 20, expired on Sunday.

Rouhani further stressed the importance of cooperation among countries to sort out key regional and global problems, expressing Iran’s determination to play an active role in that regard.

“Today, human communities are currently faced with major scourges such as terrorism. So, it is necessary that all [countries] cooperate and participate in order to eradicate it,” the Iranian president stated.

The Iceland’s envoy, who submitted his credentials to President Rouhani, said his country seeks to improve relations with Tehran in mutual and international fields.

Pulsen expressed hope that nuclear talks between Iran and the P5+1 would reach the desired outcome.