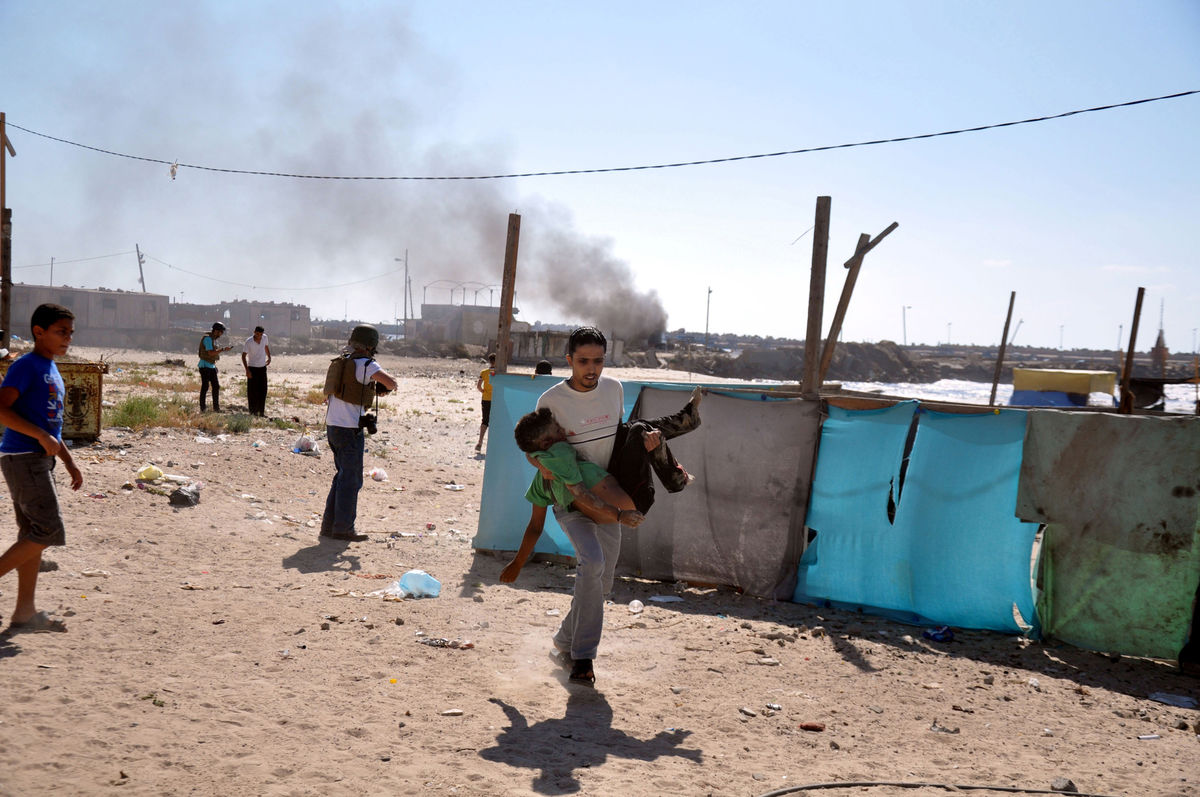 Photographer: Mohammed Talatene/Anadolu Agency via Getty Images
An Israeli airstrike killed four Palestinian children while they were playing on the beach in Gaza City, on July 16, 2014.

Instead of enjoying his summer holiday, 10-year-old Mohammed Bakker is grieving for two brothers and two cousins he saw die on a Gaza beach from Israeli navy shell fire.

“A bomb landed near us while we were playing soccer,” said Bakker, who comes from a family of fishermen. He ran to safety at a nearby cafe during the July 16 attack and within seconds “another bomb hit that same place and killed them,” he said. “I saw their bodies on the ground covered with blood and sand.”

The conflict in Gaza, an impoverished and congested sliver of land between theMediterranean Sea and southern Israel, pits a high-tech army against Palestinian guerrillas. Caught in the middle are children like Bakker and Mika Cohen, a 10-year-old Israeli, who has lived with rocket fire from Gaza most of her life. Their trauma will linger long after the fighting stops.

“War usually takes the worst toll on the most vulnerable, of whom children and women tend to be among those who bear the greatest brunt,” said Pernille Ironside, UNICEF’s senior official in Gaza City, in a telephone interview. Each conflict makes it harder for future generations of Israeli and Palestinian leaders to foster “understanding, peace and bridge the divide,” she said.

At least 117 of the 526 Palestinians killed in the current fighting have been children, according to Ashraf al-Qedra, spokesman of the Health Ministry in Gaza. Israel, like the U.S. and European Union, classifies the Hamas movement that controls Gaza as a terrorist organization and accuses it of using civilians as human shields. Israeli officials say the current campaign aims to stop the Gaza rocket fire and destroy infiltration tunnels.

While no Israeli children have died in the latest violence, the trauma of rocket fire has become for some an indivisible part of their childhood. Rockets have been thudding into southern Israel since 2001, with some border communities recording as many as 60 strikes a day in times of conflict, said Roni Lior, project coordinator for the Sderot and Gaza region at the Israel Trauma Coalition, which helps people deal with violence-related conditions.

Cohen, 10, lives in Ein Besor, 11 miles (18 kilometers) from Gaza. She has 15 seconds to find shelter when the air-raid sirens wail. Her mother, German-born Tamara, says children in the farming community are so terrified of missing an alarm that they won’t even go to the bathroom without their parents close by.

“Sometimes we are afraid,” said Cohen, “but we know what to do and we are used to this.” Peace, she said, “is my biggest dream.”

At least four Israeli children have been wounded by rockets in the current conflict, according toemergency services director Eli Bin.

In Gaza, there are no air raid shelters, and no sirens to warn its 1.8 million people of incoming missiles. Israel escalated its offensive beyond an air campaign on July 17 by invading Gaza with ground troops.

Ramez Bakker, father of one of Mohammed’s cousins killed on the Gaza beach, clutched prayer beads as friends and family tried to console him. “They broke me and killed my children,” he said, referring to the deaths among the extended Bakker clan. The boys would play by the water’s edge, often with fishing nets, sometimes soccer balls, their fathers watching from the shore where they smoked water pipes.

Israel says the beach attack that killed the Bakker children appeared to be the “tragic outcome” of strikes targeting Gaza militants.

Three boys hurt in that attack are among more than 500 wounded in the conflict, with some expected to die from their injuries, al-Qedra said. Dealing with children “is so hard because their wounds are deep and shrapnel and fragments of bombs and missiles penetrate into their tiny bodies,” he said.

At least six children have lost both parents and 10 have lost either their father or mother, Palestinian officials say. Tens of thousands are living in United Nations shelters.

Derdah al-Sha’er, a professor of psychology at Al-Aqsa University in Gaza City, estimates that the “vast majority” of Gazans under age 18 “are experiencing psychological troubles.” Half of the territory’s 1.8 million people are minors, Gaza government figures show.

“The violent and bloody scenes of the war — the destruction of homes in air strikes, body parts and corpses covered in blood and dust being pulled from rubble, night bombings while there’s no electricity — are all deeply frightening,” al-Sha’er said.

About 2,000 rockets have been shot at Israel from Gaza since violence intensified on July 8, and there have been about 2,800 Israeli air raids on the territory.

Israeli children living in border areas “are edgy, everything makes them pop,” the trauma coalition’s Lior said. Calls to the group’s hotlines have risen 700 percent in the past two weeks, with thousands of people seeking help, including many parents, she said.

In Gaza, experts say they’ll start to deal with the trauma suffered only after the fighting is over.

“First, we need to end this,” said UNICEF’s Ironside. “Then there’s a lot of work to be done.”