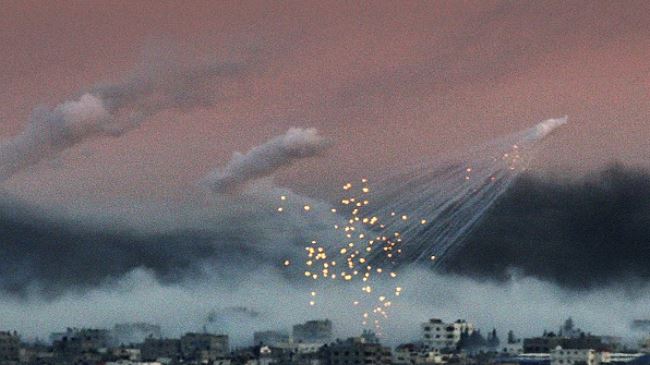 The lethal bombs violate all international conventions and are considered as banned weapons in civilian areas.

This comes as a Norwegian doctor in the besieged coastal enclave has recently criticized Israel for using cancer-inducing bombs against Palestinian civilians.

Medics says some Palestinians in the besieged enclave have been wounded by a new type of weapon that even doctors with previous experience in war zones do not recognize.

Israel also used depleted-uranium and white phosphorus shells in the besieged region during their previous assaults.

The latest revelation comes as Israeli tanks and warplanes keep pounding the besieged enclave. Sources say at 39 Palestinians were killed on Monday alone.

Sunday has been the bloodiest day of the two-week conflict. More than 100 Palestinians were killed in the Shejaiya neighborhood near Gaza City on Sunday. The majority of the victims were civilians including children, women and the elderly.

The latest casualties bring the Palestinian death toll to 510 from 14 days of Israeli attacks. Over 3000 Palestinians have also been injured in the onslaught.

Medical workers are now raising the alarm over a humanitarian crisis in Gaza where hospitals are running low on basic medical supplies.

The UN Security Council has expressed serious concern over the growing number of casualties in the Gaza Strip, calling for an immediate ceasefire between the conflicting parties.