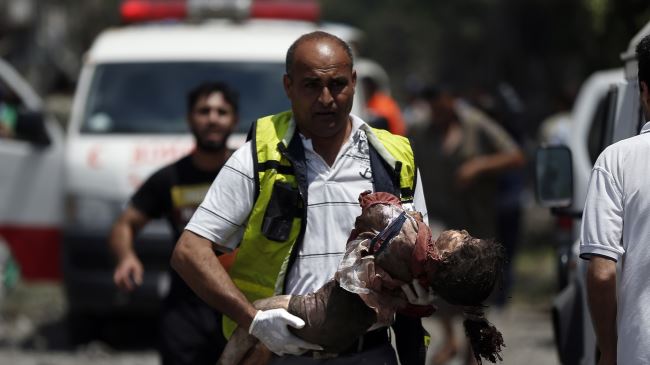 A Palestinian medic evacuates the body of a girl from Gaza’s eastern Shejaiya district on July 20, 2014.

In a statement issued on Monday, Iran’s Health Minister Seyyed Hassan Qazizadeh Hashemi condemned fresh Israeli assaults on the impoverished Gaza Strip and said the Islamic Republic was ready to supply the injured Palestinians with medicine and medical equipment.

“The hospitals of the Islamic Republic of Iran are prepared to receive the wounded [Palestinians] who are in need of medical care and complex surgeries,” added the statement.

Hashemi further said Israel has prevented the convoys of food and medicine from entering Gaza while continuing to target medical teams, rescue workers, hospitals and ambulances.

“It is necessary that international organizations take action to halt these inhumane crimes immediately and pave the way for sending aid to the besieged people of Gaza,” added the Iranian minister.

The Iranian health minister also wrote separate letters to his counterparts in Muslim countries, expressing concern over the deteriorating situation in Gaza, which he said, could lead to a “major humanitarian catastrophe.”

It is the “common duty” of all international bodies and Islamic countries to dispatch emergency medical supplies to the oppressed Palestinians living in the Gaza Strip, he highlighted in his letters.

Israeli warplanes began pounding the impoverished Gaza Strip on July 8. The Israeli military also launched a ground offensive against the blockaded coastal sliver on July 17. More than 505 Palestinians have been killed in the onslaught. 18 Israeli soldiers have also been killed in the war.