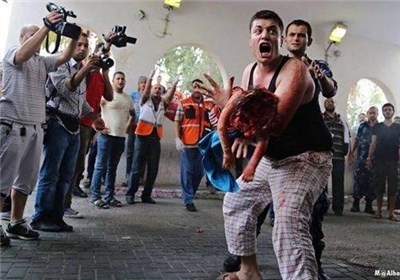 TEHRAN (Tasnim) – The Palestinian death toll in the Gaza Strip rose to more than 500 people on Monday as the Israeli offensive entered its 14th day, a spokesman for the Health Ministry announced.

Since the beginning of the offensive with coastal attacks around two weeks ago, 501 Palestinians have been killed and 3,150 injured, Ashraf al-Qudra said on Twitter.

A fresh air strike on Monday morning killed a family of nine, including seven children, after a weekend of incessant shelling by land, sea and air sent thousands of terrified civilians fleeing their homes.

Qudra said many of the more than 150 Palestinians killed on Sunday -the bloodiest day of fighting in Gaza in years- were women and children, DPA reported.

On Sunday, thousands of Palestinians fled the Shejaiya neighborhood, between Gaza City and the Israeli border, after hours of heavy shelling which killed 72 people.

The Israeli army said 13 soldiers had been killed inside Gaza on Sunday, raising to 18 the number of soldiers killed since a ground operation began late on Thursday. About 80 Israeli soldiers have been wounded, according to reports on Israel radio.

Late Sunday, the al-Qassam Brigades, the armed wing of the Palestinian resistance movement Hamas, said it had kidnapped an Israeli soldier, prompting celebrations in the streets of Gaza City and West Bank towns.

“The Israeli soldier Shaul Aaron is in the hands of the Qassam Brigades,” a spokesman using the nom de guerre Abu Obeida said in a televised address.