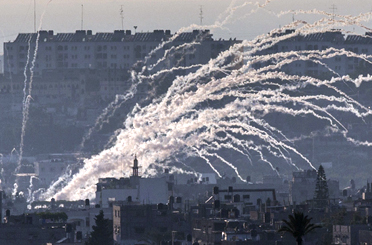 TEHRAN, July 21 (MNA) – At least 25 members of the same family found dead under debris of a house destroyed in Israeli strike.

Palestinian health officials said rescue teams had uncovered the bodies of at least 25 members of the Abu Jamea family underneath rubble of their demolished house in Khan Younis.

The airstrike reportedly struck shortly after the break of the Ramadan fast, according to the Red Crescent.

At a morgue in Khan Younis, family member Sabri Abu Jamea mourned the deaths of his relatives, laid out on shelves in refrigerators.

Sunday was the bloodiest day in the nearly two-week conflict between Israel and Palestinians in Gaza; more than 100 Palestinians and 13 Israeli soldiers were killed. At least 508 Palestinians and 20 Israelis have been killed since the start of the offensive. Tens of thousands of Gaza residents have been displaced and over 3000 are wounded.