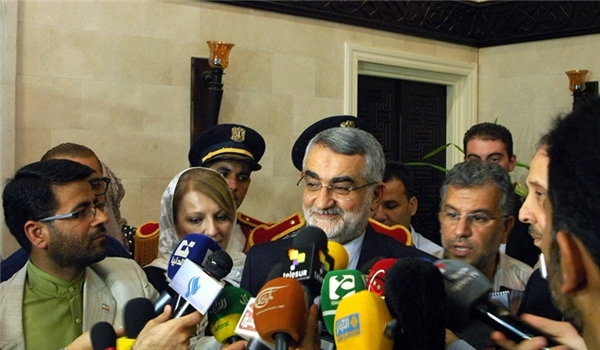 TEHRAN (FNA)- A senior Iranian legislator warned that Tehran will resume its program for enriching uranium to 20% grade if the negotiations with the Group 5+1 (the US, Russia, China, Britain and France plus Germany) fail to yield results.

“The relevant officials have declared to the Americans that in case of failure in reaching an understanding, Iran will rapidly return to resume (the operation of its nuclear program’s) earlier phases, including the 20% enrichment and launching new centrifuges and Arak (heavy water) reactor,” Chairman of the parliament’s National Security and Foreign Policy Commission Alaeddin Boroujerdi told reporters in Tehran on Sunday.

He underlined that the Iranian team of negotiators have just raised the least of their demands during the talks with the world powers and the Americans should pay attention and remember this, implying that Iran will never give up even an iota of the demands it has made in the talks.

In relevant remarks in June, Iranian Deputy Foreign Minister Seyed Abbas Araqchi said despite the transient halt in Iran’s uranium enrichment above the 5% grade, the country has not and will not give up its right to enrich uranium to the 20% grade.

Iran and the G5+1 ended nearly two weeks of negotiations in Vienna on Friday with no final agreement between the two sides which was due to be reached before the July 20 deadline.

The two sides agreed to extend the talks till November 24 for brokering a final deal.