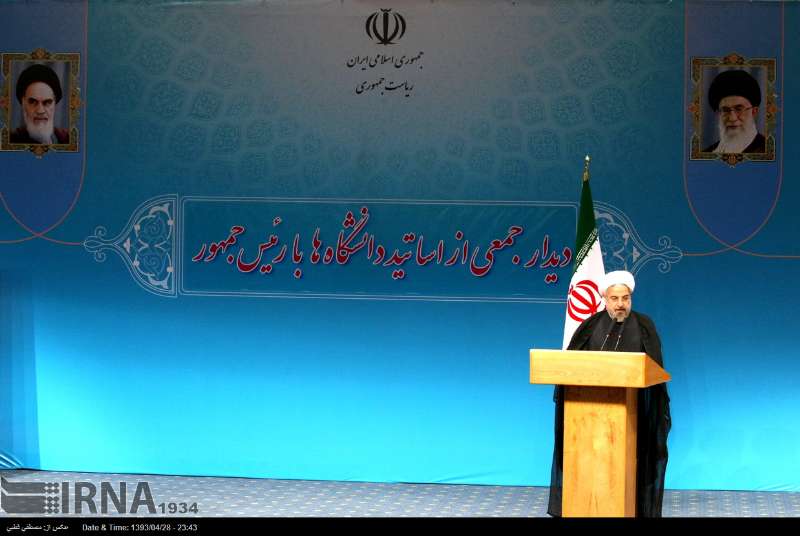 TEHRAN (Tasnim) – Iran’s President said targeted scientific effort is the main expectation from the country’s universities, and called on the Iranian scientific elites to find proper solution to the existing problems in the country.

Addressing university professors and academics here in Tehran on Saturday evening, President Hassan Rouhani said a university course which ends up merely with a few articles and books cannot be called targeted effort.

Rouhani noted that universities should recognize the country’s problems and propose measures to tackle such problems.

The President reiterated that universities have a critical mission in the field of wisdom and science, and based on such mission the country can overcome all its problems.

Earlier this month, the Supreme Leader of the Islamic Revolution Ayatollah Seyed Ali Khamenei had also emphasized the necessity for acceleration of the country’s scientific progress.

Imam Khamenei had underlined the importance of “serious, speedy, and all-out continuation of the scientific movement” in the country and described it as the main factor forming the future of Iran and the Muslim world.

According to the international information firm Thomson Reuters, Iran’s share of global science production in 2013 was 1.57 percent, putting the country in 20th position in the world.

Iran’s 2009 growth rate in science and technology was highest globally, being 11 times faster than the world’s average rate.