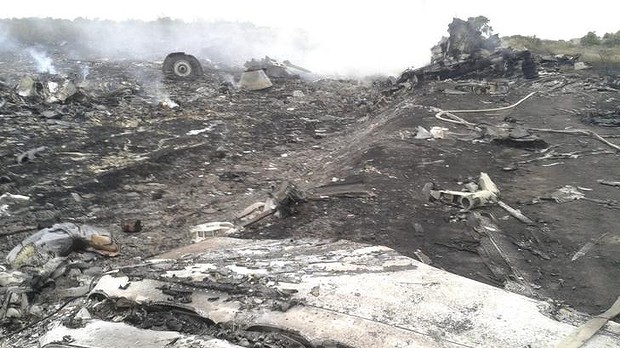 London: A Malaysia Airlines plane en route from Amsterdam to Kuala Lumpur has been shot down in separatist-controlled eastern Ukraine, claiming the lives of 298 passengers and crew, including 27 Australians.

It was originally reported that 295 passengers and crew were on board the plane. However, Malaysia Airlines has updated the figures to 283 passengers and 15 crew members.

Emergencies Ministry members work at the site of a Malaysia Airlines Boeing 777 plane crash in the settlement of Grabovo in the Donetsk region. Photo: Reuters

“As things stand this looks less like an accident than a crime.”

“And if so the perpetrators must be brought to justice.”

The tragedy marks a serious escalation of the ongoing crisis in Ukraine and comes only months after Malaysia Airlines flight MH370 mysteriously disappeared somewhere over the Indian Ocean. It is the biggest overseas disaster affecting Australians since the Bali bombing of 2002.

“If you have any concerns for the welfare of Australian family or friends, you should attempt to directly contact them,” the Australia’s Department of Foreign Affairs and Trade said.

The site of the Malaysia Airlines Boeing 777 plane crash in the settlement of Grabovo in the Donetsk region. Photo: Reuters

There were 154 Dutch passengers on MH17. Malaysia Airlines said there were also 45 Malaysian, 12 Indonesian, and nine British passengers aboard the flight.

Bodies and burning wreckage were scattered over the countryside near Donetsk, eastern Ukraine.

Ukrainian President Petro Poroshenko has called the crash of Malaysia Airlines MH17 a ‘terrorist act’ and blamed pro-Russian rebels on shooting it down. Photo: Reuters

After convening a meeting of the National Security Committee of the Cabinet, Mr Abbott announced plans for Australia’s foreign minister Julie Bishop to summon the Russian ambassador to seek assurances of full cooperation from Russia in the investigation of the flight.

Mr Abbott has used strong language in describing the events leading to the plane’s destruction.

”They (the militants) are Russian proxies essentially,” said Mr Abbott earlier in the day. “This is only happening because Russia wants to stir up trouble.”

People, who said they believed their relatives were on Malaysia Airlines flight MH17, react as they wait for more information about the plane at Kuala Lumpur International Airport. Photo: Reuters

”Now, it’s important that we don’t make a situation worse, but if, as now sees certain, it has been brought down by a Russian-supplied surface-to-air missile, Russia bears a heavy share of responsibility.”

Another system saw a heat signature when the airliner was hit in the air. Experts were tracing the missile’s trajectory to work out whether it was launched from Ukraine or Russian territory.

A message of condolence is left among candles and flowers near the Dutch embassy for victims of MH17. Photo: Reuters

Independent Western defence experts say both Ukrainian and Russian armed forces possess SA-17 missile launchers capable of reaching an altitude of 20,000 metres and that pro-Moscow insurgents may have gotten their hands on one to two surface-to-air missiles when Ukrainian forces retreated.

About 100 of the passengers on the doomed flight were headed to a major international AIDS conference in Melbourne.

“A number of people who were travelling to Malaysia for an international AIDS conference were also on board,” Foreign Minister Julie Bishop told reporters.

“At this incredibly sad and sensitive time the IAS stands with our international family and sends condolences to the loved ones of those who have been lost to this tragedy,” the conference organisers, the International AIDS Society, said in a statement.

Melbourne couple Albert and Maree Rizk have been confirmed as victims of the flight. The were thought to be returning from a holiday in Europe.

Elaine Teoh, a 27-year-old Melbourne University student, has been confirmed as a passenger on the flight.

The International Air Transportation Association said that the airspace the aircraft was traveling through was not subject to restrictions, according to the Malaysian Prime Minister’s office.

However, aviation safety authorities in the US and Europe warned pilots in April about potential risks flying in or near Ukraine airspace.

The US Federal Aviation Administration on April 23 issued a “special notice” regarding Ukrainian airspace to US aviators and air carriers advising them not to fly in airspace around the Crimean city of Simferopol without special approval of the US government.

Eastern Ukraine has been racked for months by a violent pro-Russian separatist uprising in which a number of military aircraft have been downed. The geopolitical tussle has plunged relations between the US and Russia to their lowest level since the Cold War.

This would be the first commercial airline disaster to result from the hostilities. Despite the turmoil in eastern Ukraine, the commercial airspace over that part of the country is a heavily trafficked route and has remained open.

Malaysia Airlines said MH17 did not make a distress call.

US Vice-President Joe Biden said the Malaysia Airlines aircraft was “apparently” shot down.

While stressing that the US did not have all the details, Mr Biden described the plane as, “Shot down, not an accident. Blown out of the sky.”

“I want to point out that this tragedy wouldn’t have happened if there was peace in this land, or at least if fighting hadn’t resumed in the south-east of Ukraine,” Mr Putin said. “And undoubtedly, the state on whose territory this happened is responsible for this awful tragedy.”

Social media posts by pro-Russian insurgents — most of them hastily removed — suggest the rebels thought they had shot down a Ukrainian army plane before realising in horror that it was in fact a packed Malaysian airliner.

The Twitter and blog messages were immediately publicised by top Kiev officials in their furious information war with the Kremlin for global opinion and the hearts and minds of ethnic Russians caught in the East-West crisis.

Asked if Australia would still welcome Mr Putin to the G20 Summit to be hosted in Brisbane in November, Australia’s PM Tony Abbott said: “Let’s just wait and see exactly what turns out to have happened here.”

Malaysia Airlines, still reeling from the mysterious loss of another Boeing 777 flight in March, confirmed that Ukrainian air traffic control lost contact with flight MH17 at 1415 (GMT), approximately 50 kilometres from the Russia-Ukraine border.

Flight MH17, operated on a Boeing 777, left Amsterdam at 12.15pm (Amsterdam local time) and was due to arrive at Kuala Lumpur International Airport at 6.10am (Malaysia local time) the next day.

Freelance journalist Noah Sneider, at the crash site, reported: “Locals say everything exploded in the air, fell in pieces, both bodies and plane itself. People thought they were being bombed.”

After the crash, other airlines were rerouting flights around the conflict area.

A New York Times reporter at the site said the plane came to rest in a wheatfield. Many of the passengers’ bodies were still belted in their seats and attached to pieces of the plane, she said.

The Prime Minister of Malaysia, Najib Razak, familiar with the glare of scrutiny following the missing MH370 flight saga, conveyed sympathy and support to family and friends of the victims.

“At this early stage, however, Malaysia is unable to verify the cause of this tragedy,” he said.

“But we must – and we will – find out precisely what happened to this flight.

“No stone can be left unturned.

“If it transpires that the plane was indeed shot down, we insist that the perpetrators must swiftly be brought to justice.”

Russian newsagency Interfax reported that pro-Russian separatists claimed to have found the black box flight recorders from the plane.

Separatist leaders said they would send the plane’s flight recorders to Moscow for examination – something Mr Najib urged against.

“An international team must have full access to the crash site,” Mr Najib said.

“And no one should interfere with the area, or move any debris, including the black box,” he said.

According to an online flight tracking site, the plane’s last known position was near Donetsk at an altitude of just over 10 kilometres.

He said Ukraine’s armed forces were not involved, and on behalf of the state expressed his “deepest and most sincere condolences to the families and relatives of those killed in this terrible tragedy.”

Within hours of the crash, Ukrainian media blamed Russian-backed Cossack militants, publishing what the Kyiv Post said was the content of a phone call between members of Russian-backed militant groups, intercepted by Ukraine’s security agency.

The phone call was made 20 minutes after the crash, the Kyiv Post reported, by Igor Bezler, military commander of the separatist Donetsk People’s Republic.

He was said to be reporting to a Russian army colonel in their intelligence department.

In a transcript of the conversation Mr Bezler says “We have just shot down a plane.”

US Republican senator and foreign policy hawk Lindsey Graham told CNN that if the plane was proven to be shot down by Russians or pro-Russian separatists, it would be a “game changer.”

“If they are responsible — and I have no idea they are — you would take the sanctions we’ve unilaterally imposed, toughen them and get the world behind them,” he said. “Start arming the Ukrainian military is what I would do.”

Writing in Foreign Policy commentator Peter D. Feaver said that: “Some game-changing aspects are likely, regardless of who is at fault.”

Mr President Obama won’t be able to pretend that his “light-touch approach has been working” in Ukraine, a point Mr Feaver believes Mr Obama has conceded by the recent decision to ratchet up sanctions.

Mr Obama said it looked like a “terrible tragedy” and the US would offer any assistance it could to determine what happened and why.

“Facts need to be established immediately. My thoughts with families of victims,” he wrote.

The Dutch Prime Minister, Mark Rutte, was flying back from Brussels to deal with the crisis.

By The Sidney Morning Herald