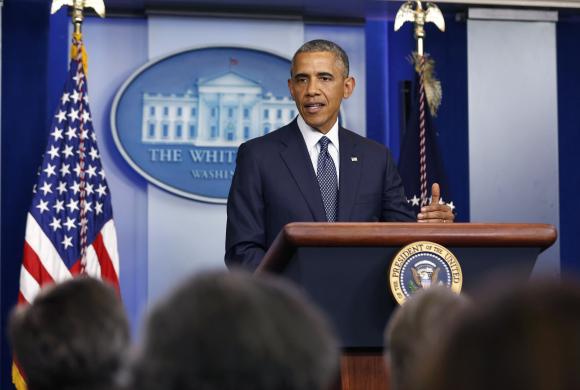 Obama: No quick and easy solutions to foreign policy challenges

U.S. President Barack Obama talks about Ukraine while in the press briefing room at the White House in Washington, July 16, 2014.
CREDIT: REUTERS/LARRY DOWNING

(Reuters) – President Barack Obama, facing persistent criticism of his handling of foreign policy, counseled patience on Wednesday on meeting challenges from Iran to Ukraine to the Middle East.

In brief remarks in the White House press briefing room, Obama appeared to push back against critics who feel he has failed to act decisively on a number of fronts.

Obama announced new sanctions against Russia over its aggression towards Ukraine, said progress had been made but more time might be needed to negotiate a comprehensive nuclear deal with Iran, and said he was supporting efforts to reach a ceasefire between Israel and the Palestinians.

Obama also cited Secretary of State John Kerry’s help in trying to resolve a standoff over Afghanistan’s presidential election as an example of American leadership.

“We live in a complex world and at a challenging time. And none of these challenges lend themselves to quick or easy solutions, but all of them require American leadership,” he said.

“And as commander-in-chief, I’m confident that if we stay patient and determined, that we will, in fact, meet these challenges,” he said.

The comments seemed designed to combat a perception among Washington’s pundit class that Obama and his team have fumbled foreign policy.

Washington Post foreign policy columnist David Ignatius wrote on Wednesday that Obama has been steady on Ukraine and in seeking a unity government in Iraq before launching airstrikes.

But he said a delay in framing a plan for stopping the Islamist uprising in Iraq and damaged U.S. relations with Germany were examples of White House inertia.

A NBC News/Wall Street Journal poll last month said just 37 percent of Americans approve of Obama’s handling of foreign policy while 57 percent disapproved. NBC said it was the lowest level of his presidency.