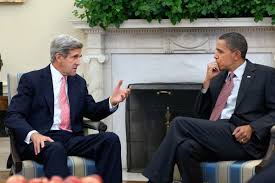 White House spokesman Josh Earnest said Iran’s track record in implementing an interim agreement has been “surprisingly favorable” and noted the “legitimate discussion and constructive engagement” between Iran, the U.S. and five other world powers.

Diplomats told The Associated Press that Iran and the world powers have tentatively decided to extend the talks beyond that deadline. Earnest would not confirm that decision nor did he outline the possible options Obama and Kerry discussed.