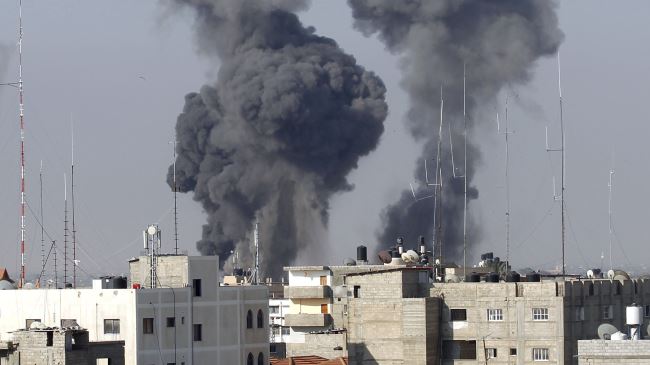 Israel launched raid on Gaza based on made-up excuse: Analyst

A political analyst says the Israeli regime fabricated the story of the alleged killing of three Israeli settlers by Hamas to have an excuse to attack the besieged Gaza Strip.

“The whole operation has been constructed on the basis of really a lie,” James Thring, a political commentator, told Press TV in a Wednesday interview.

Israel has been pounding the besieged Gaza Strip for 10 consecutive days, killing at least 227 people and injuring around 1600 others.

“These are clearly war crimes on behalf of Israel,” the analyst said, referring to the recent Israeli regime’s offensive in blockaded Gaza Strip and the brutal killing of Palestinians there.

Violence against the Palestinians has intensified over the past month. Mohammed Abu Khdeir, a Palestinian teen, was burned alive in East al-Quds (Jerusalem). Abu Khdeir’s death came after Israel found the dead bodies of three settlers whose deaths it blames on Hamas. The resistance movement rejects the allegation.

“It was a lie that Hamas was responsible for those deaths. They would have said if they had been,” Thring said.

Since July 8, the Israeli regime has struck more than 1,800 targets across Gaza, which is home to around 1.8 million Palestinians.

According to the UN humanitarian agencies, about a third of the dead are women and children. Some 18,000 people have taken shelter in Gaza schools. The Ezzedine al-Qassam Brigades, the military wing of the Palestinian resistance movement Hamas, has been launching retaliatory attacks against Israel.

Israel has blockaded Gaza since 2007, denying the Palestinian people there their basic rights, such as freedom of movement, jobs that pay proper wages, and adequate healthcare and education.