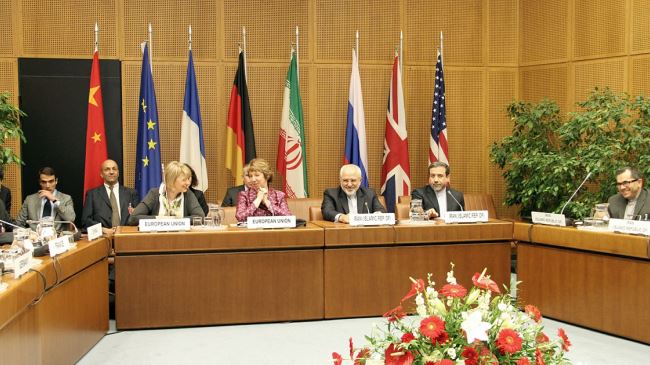 A general view of the latest round of talks over Iran’s nuclear energy program which kicked off in the Austrian capital city of Vienna on July 3, 2014

Iran and the P5+ 1 group are reportedly working to finalize the terms of a potential extension in the ongoing negotiations over Tehran’s nuclear energy program beyond the July 20 deadline.

Reuters quoted Western diplomats as saying on Wednesday that an announcement on the possible extension of the talks between Iran and the five permanent members of the UN Security Council — the United States, France, Britain, Russia and China — plus Germany may come on Friday.

“We hope to be gone before Sunday and wrap up [the extension] before the weekend,” a Western diplomat said.

Several diplomats close to the ongoing negotiations in the Austrian capital Vienna suggested they expected the talks to resume in September, the report said.

Iran and the six world powers kicked off their sixth round of talks this year in Vienna on July 3 to discuss drafting a final nuclear accord as a July 20 deadline draws near.

On Wednesday, Iranian Foreign Minister Mohammad Javad Zarif said that Tehran has not yet agreed to the extension of the ongoing nuclear talks with the P5+1 beyond the July 20 deadline.

Zarif said Iran’s talks with the six powers would continue seriously until Sunday. Officials from both negotiating sides have said that despite progress made in the latest round of negotiations significant gaps still remain between the two sides.

Iran and the six countries reached an interim deal in Geneva in November 2013. Under the six-month deal, which took effect on January 20, sanctions against Iran were partially suspended while Iran scaled back its nuclear energy program.

Iran and its negotiating partners are currently in talks to iron out their differences and achieve a permanent comprehensive deal aimed at ending the decade-old dispute over the country’s civilian nuclear work.